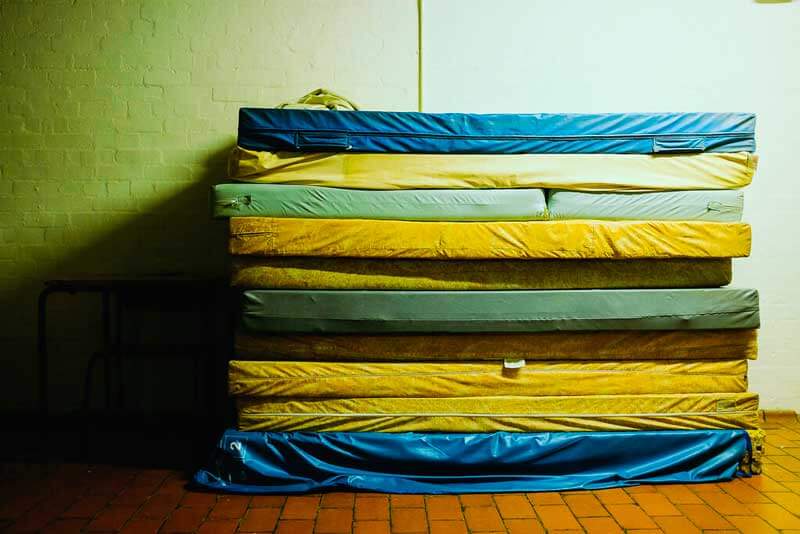 We’re never surprised to learn how strange the realm of sleep can be. So we’ve dug deep to bring you our top 8 bizarre sleep disorders. From exploding heads to sudden deaths in the night, once you find out about these rare and unusual conditions you’ll never complain about your insomnia again.

First we have the often terrifying condition known as sleep paralysis. In recent years scientists have established that the condition – a feeling of being awake but unable to move – is probably a result of not being able to move smoothly through the stages of sleep.

But over the centuries, sleep paralysis has been linked to an ‘evil’ presence watching over you whilst you sleep. Cultures across the globe tell of legends of sleep paralysis demons or an incubus that preys on unsuspecting victims at night. The 2015 documentary The Nightmare even goes as far to suggest that sleep paralysis may even be the origin of modern horror movie tropes and myths.

Possibly a candidate for the best medical condition name ever, Exploding Head Syndrome is a parasomnia which, fortunately for the sufferer, doesn’t involve any actual heads exploding.

The condition was first described in the 1920s by  Welsh physician Robert Armstrong-Jones as a “snapping of the brain.” In 1989, neurologist John M. S. Pearce completed a detailed study of 50 patients with the disorder.

Sufferers experience an extremely loud explosive noise in their heads, often accompanied by a flash of light. The noises have been variously described as a loud bang or a shotgun or bomb going off.

The sensation usually occurs at the onset of sleep and lasts only for a few seconds. Surprisingly, although it can be incredibly distressing, the syndrome is benign, with no reported physiological effects.

Marie Raymond,who suffers from the condition, sometimes hears her named shouted out, even though no one is around. At other times she wakes up with a bang, “feeling like a character out of Poe,” as she puts it.

As disconcerting as it is, exploding head syndrome does not occur very frequently, but the mere thought of it can keep her awake evenwhen she isn’t experiencing it.

While dying in your sleep might sound peaceful, for people who suffer from Sudden Unexpected Nocturnal Death Syndrome or SUDS, it is anything but. Most common in Southeast Asian males, it occurs in populations that are culturally and genetically distinct.

Observers of SUDS patients have witnessed screaming, moaning, frothing at the mouth, and other signs of terror, just before death occurs and it’s impossible to wake someone up at this point.

It’s no wonder that the condition is steeped in superstition, with evil spirits and mythological creatures often being blamed for the deaths.

SUDS was first described in the medical literature in 1917 amongst young adults in the Philippines. Similar deaths were reported in Japan in 1959. However, the most famous cases were documented in groups of Hmong refugees from Northern Thailand and Laos who made their way to the United States.

With over 100 cases of SUDS being reported in the US since 1981, the condition was even termed Hmong Death Syndrome for a while.

Although the common cause for the deaths appears to be ventricular fibrillation (a type of heart failure), the ultimate cause remains a mystery. Recent research by Dr. Joseph Brugada has found a possible genetic link for this disorder, but this doesn’t explain why sleep is such an important factor in SUDS. At it’s core, SUDS still remains a bizarre and unexplained mystery.

Imagine what it would be like to wake up one day and never fall back asleep again. You suffer  tormented sleepless nights, and as exhaustion blurs the boundaries of reality, you experience paranoia, delusions, panic attacks and phobias.

Starved of adequate rest, your physical health then starts to deteriorate. One year later, your body and mind can take no more, you fall into a coma and die.

This may sound like the plot of a nasty psychological horror movie, but these are the actual symptoms of a rare genetic condition which, if you are unfortunate to inherit, could end up killing you.

Fatal familial insomnia (FFI) shows up in middle age and there isn’t anything that modern science can do to prevent it.

It’s similar to Creutzfeldt-Jacob Syndrome, the human form of “mad cow disease” FFI is passed on by a mutated gene which causes rogue proteins in the brain attack other healthy proteins, leading to the hideous list of symptoms and side effects which eventually lead to death.

The condition was discovered in 1984 when sleep expert Dr. Elio Lugaresi was contacted by a doctor who was trying to unravel a series of mysterious deaths in his family. Dr Lugaresi examined a patient known as Uncle Silvano who exhibited all the signs of FFI.

Video-taping his semi-awake state, he witnessed the patient acting out his life in a dream-like state, half-awake, half-asleep. Eventually, his body shut down and he died at the age of 52. Pierluigi Gambetti who later examined the brain of Uncle Silvano, described the condition as “the worst disease you can get.”

It’s one thing to wake up with a craving for sex, but people with sexsomnia take their sexual urges a step further – entirely unintentionally. The term was coined by Canadian psychiatrist Colin Shapiro and his colleagues who defined it as a parasomnia that involved “complex motor and autonomic activity with sexual arousal” which distinguished it from the more benign phenomenon of sleep walking.

You are more likely to exhibit sexsomnia behaviour if you have a history of other nocturnal activities such as sleepwalking or sleep talking. Other factors that may increase the likelihood of an episode are are alcohol or drug abuse and sleep deprivation.

Unsurprisingly, sexsomnia has had a highly controversial history in the law courts, as it raises serious questions about consent. There has been more than one case where an accused sex offender has been acquitted on the grounds that they were asleep at the time of their actions.

In 2010, the National Center For Prosecution Of Child Abuse published a paper titled “SEXSOMNIA:Overcoming the Sleep Disorder Defense” to raise awareness about the potential misuse of clinical diagnoses in cases involving alleged sexual misconduct.

Despite wide publicity in recent years sexsomnia is yet to be fully recognised universally by medical practitioners as a genuine sleep disorder. As they say on TV, the jury is still out….

Lots of people enjoy a midnight snack once in a while, but for an unfortunate few, eating at night becomes a regular, compulsive habit which they have no control over.

It’s unclear whether these are distinct or separate disorders, but both involve near nightly binges, and a complete lack of awareness from the sleep-eaters.

There is no purging involved, as in the case of bulimia, a common eating disorder, so this often leads to weight gain, as well as feelings of shame or guilt. As if this wasn’t enough, because they are clinically asleep, they are prone to accidents including cuts, burns and injuries from falling.

Shirley Koecheler, 54 had a a history of sleepwalking but when she got married she began to eat in her sleep too. She would awake to find crumbs in the bed and chocolate wrappers in the waste basket. She would have no recollection of her trips to the kitchen the next morning.

Science has yet to figure out what triggers these nocturnal feasts. Are they an extension of daytime eating disorders, or maybe a completely unrelated phenomena similar more akin to sleepwalking?

Some drug treatments have brought limited success, but apart from putting a padlock on your fridge there’s no known cure at present.

Kleine-Levin Syndrome (KLS) is a rare neurological disorder that mainly strikes during the years of adolescence. Patients experience prolonged periods of sleep and strange, altered behaviour.

KLS episodes are cyclical and can last for days or even months, giving rise to the nickname “Sleeping Beauty Syndrome” by some sections of the media, even though over 70% of known cases have been males.

When an episode starts, it may be preceded by flu-like symptoms. The patient becomes drowsy and sleeps for most of the day, only waking to eat or go to the toilet.

They may sleep for up to 23 hours a day and during their wakeful periods, the patient exhibits uncharacteristic, bizarre behaviours, including increased appetite, childishness, and sometimes an uninhibited sex drive.

When the episode is over, the patient has little recollection of what happened and experiences confusion, disorientation and they are hypersensitive to sound and light.

22 year Alanna Wong, who suffers from Kleine-Levin Syndrome, spends weeks at a time totally unaware of her surroundings. When stricken by her condition she spends up to 22 hours a day sleeping, interspersed with tantrums, child-like babbling and an inability to read or write.

Currently, doctors have no cure for the condition and it isn’t high on the list for research, since only about 1000 people worldwide are estimated to have it. One glimmer of hope for KLS patients is that episode usually decrease in intensity and frequency after about 8 to 12 years of first onset.

Our final bizarre sleep disorder goes by the rather wordy name of Non-24-hour sleep-wake disorder or Non-24 for short. Unlike most of us whose body clocks are closely tied to a 24 hour clock, patients with Non-24 possess a circadian rhythm set on longer loops, usually resulting in a 25 or 26 hour sleep/wake cycle.

Whilst this may sound relatively benign, in practice it means that each day, normal sleep/wake times are pushed “out of whack” by an hour or two, making it virtually impossible to hold down any regularly scheduled activities such as school or work.

The effect is not unlike having permanent jet lag, except that each day, your body clock is falls further out of sync in a never ending cycle. Eventually you briefly align with the rest of the 24 hour world, only for the cycle to begin again.

Non-24 is also known as Free Running Disorder (FRD), and is surprisingly common amongst the blind who are unable to receive normal light/ darkness cues from the environment. In sighted patients, free-running sleep behaviour is most commonly treated with a combination of light therapy and melatonin.

Exposure to bright, full spectrum light in the morning mimics the natural daily cycle of sunlight, whilst supplements taken at night can bring melatonin levels (the ‘sleepy’ hormone) up to normal, encouraging normal sleeping hours.

Since society is structured around a consistent 24-hour cycle, the negative effects of Non-24 can be exacerbated by early mornings or late nights brought on by societal obligations and expectations. Whilst there are no other physiological symptoms of the condition, the on-going psychological stress can be very debilitating.