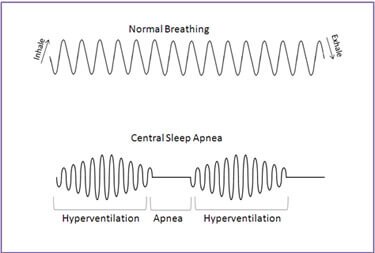 There are different types of sleep apnea. The most common form of the condition is called obstructive sleep apnea (OSA), caused by a physical obstruction of the airways. With OSA, the breathing airway  becomes blocked at night, causing an inability to breathe properly, resulting in snoring and associated sleep problems.

People with CSA will experience pauses in breathing and the irregularity between the deep and shallow breaths; however these symptoms cannot always be used for a diagnosis unless there is somebody around to witness them as the sufferer sleeps. Central sleep apnea is more easily noticed by a partner rather than the patients but those sleeping alone should not worry because there are other symptoms to look out for.

Common signs and symptoms of central sleep apnea include:

Central sleep apnea causes difficulty in sleeping, daytime fatigue, headaches in the morning, irritability and difficulty concentrating. Anybody that has experienced any of these signs, has been woken in the night by shortness of breath or had difficulty getting a full night’s sleep should consult medical advice.

CSA is a complex condition and there are a number of potential different causes. It is often caused by an existing medical condition or from taking medication.

Because CSA is a condition relating to the brain stem, neurological diseases and impairments can often play a big part but there are many other illnesses such as kidney failure, hyperthyroidism and congestive heart failure which can also contribute to it.

In the case of heart issues, patients can often experience Cheyne-Stokes breathing, a type of apnea where sufferers experience irregularities in their breathing patterns and lack of breath.

Treating central sleep apnea can be more difficult than treating obstructive sleep apnea but there are some methods that can help.  Losing weight and a healthier lifestyle are a great place to start as are changes to the sleeper’s sleeping habits – for instance refraining from sleeping on their back, using pillows in a more beneficial position and practising good sleep hygiene.

If these initial treatment options do not work there is another method that can be implemented. CPAP is the most common treatment for OSA but there is an alternative version specially designed for central sleep apnea.

Bilevel positive airway pressure (BIPAP) helps to regulate pressure in the airways during sleep in order to combat negative breathing patterns and ultimately eliminate the pauses in breathing. Some of these machines are even equipped with a detector that recognise this dangerous lack of breathing.