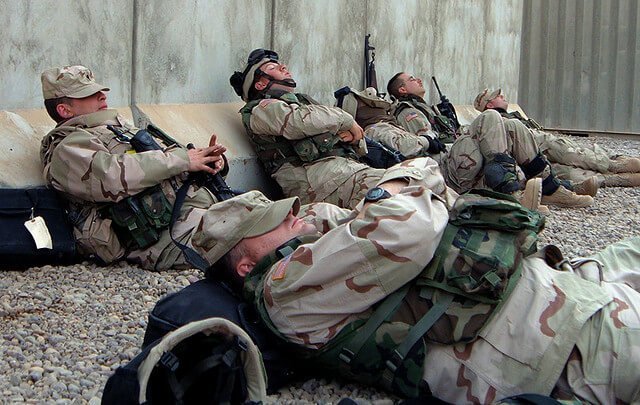 Soldiers in Afghanistan who regularly consume energy drinks like Red Bull, 5-Hour Energy and Monster Energy are more likely to fall asleep whilst on guard duty, a new report has found.

The study collected data from over 1000 U.S. soldiers and Marines deployed to Afghanistan in 2010 and comes at a time when record numbers of the caffeine laden beverages are being sold to teens and young adults, despite little being known about the possible ill effects of long term usage.

Are soldiers addicted to energy drinks?

The worldwide energy drink market is now worth over $8 billion, and it seems the US army is responsible for a good proportion of that. The report found that military personnel were seven times more likely to use energy drinks on a daily basis than civilians.

Nearly half of those interviewed (44.9%) drank at least one a day, compared with an incidence of 6% for the civilian population. 14% of the interviewees consumed more than three per day. The report also stated that the widespread availability of these “energy boosters” in the combat enviroment made it “easy for service members to consume them in large volumes.”

Red Bull, where are my wings?

Energy drinks are supposed to keep you awake and alert, however soldiers who drank three or more a day experienced a range of ‘negative sleep outcomes’ and were more likely to:

It is unclear from the data whether the energy drinks were the cause of the sleep problems or are a reflection of it but the relationship is consistent with previous research linking caffeine use with daytime sleepiness.
The report concludes that energy drinks should be consumed in moderation as not enough is known about the adverse effects on sleep and “mission performance”.
Extract from the full report:

Beverages marketed as energy drinks have become a popular form of caffeine consumption targeted at young males, with some brands containing the caffeine equivalent of 1–3 cups of coffee or cans of soda. ….Paradoxically, excess consumption also can increase sleep problems and daytime sleepiness, which can impair performance….. Energy drinks are relatively new, generally unregulated, and lack warning labels. Service members should be educated that the long-term health effects of energy drink use are unknown, that consuming high doses of energy drinks might affect mission performance and sleep, and that, if used, energy drinks should be consumed in moderation.

Energy Drink Consumption and Its Association with Sleep Problems Among U.S. Service Members on a Combat Deployment

The military report comes at the same time Monster Beverage Corp are facing an investigation by the Food and Drink Administration over the safety of their products.

Since 2009 five people have died reportedly as a result of drinking their high-caffeine soft drinks and lawmakers are calling for tougher regulation of the multi-billion dollar energy drinks market which saw sales grow by 17% last year.

According to a report by the Substance Abuse and Mental Health Services Administration, over 13,000 people were admitted to hospital emergency rooms in 2009 because of energy drinks, a ten-fold increase since 2005.