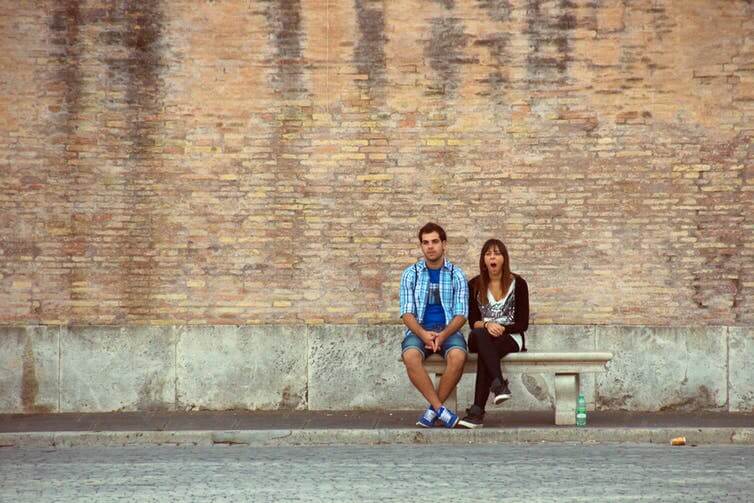 Explainer: what is jet lag and how can you overcome it?

A scientific explanation of what jet lag is, how it affects our body clock, and the best ways to combat jet lag

Long flights across many time zones often leave us feeling fatigued, sleepy, irritable and generally out of sorts. And it’s not just because of poor sleep on the plane and dehydration from the altitude – the feelings persist for several days.

Jet lag is caused by our 24-hour body clock lagging behind the rapid change of clock time over the flight. Our body clock has a strong effect on the times across the day we feel alert and when we feel sleepy. The body clock consists of our circadian rhythms.

For a person who regularly sleeps from 11pm to 7am, all of our circadian rhythms will become aligned to ensure best sleep during those times. In the middle of the sleep period, around 4am, the body drops to its lowest body temperature (known as Tmin). This is also the time when melatonin hormone secretion is highest.

Once the body clock becomes stabilised, it is resistant to change. So, after less than a day in the air, our body clock is still on home time when we arrive at our destination. This is where the problem arises.

Take the example of flying from the Sydney to London. At this time of year, there is a nine hour time zone difference between the two cities. If you arrive in London at 7am in the morning, your body clock will be telling you it’s 4pm.

By 1pm London time, you’re likely to want to take a nap. But try not to fall into a deep sleep; your body will be telling you it’s 10pm so you’ll have to resist the urge to sleep through until 7am your body clock time. This, of course, would mean waking up at 10pm London time ready to start your “day”.

If you manage to stay awake until early evening, you will still be woken up early the next morning by your early timed body clock and early “wake-up zone”, making you feel tired the next day. Until you can shift the timing of your body clock later by about eight to nine hours, your jet lag will continue to cause extreme tiredness in the late afternoon and disturbed sleep at night.

The good news is you can re-time the body clock. The strongest effect is from appropriately timed visual light stimulation.

For a Sydney to London trip, you would need to delay your body clock by about nine hours to most quickly align your body clock to London time. Fortunately, normal daylight can be used as it occurs before Tmin up to about the Tmin time. So spend the day outdoors if possible. Even a cloudy day is better than staying indoors.

However, after your body clock has been delayed by a few hours from outdoor light, your Tmin will now have moved “out of reach” of the delaying effect of daylight, since only light administered close to Tmin has a strong re-timing effect. Your body clock re-timing may stop well short of the eight to nine hour delay needed for full re-alignment.

In that case, it would be useful to use artificial indoor light stimulation in the later evening to complete the jet lag cure.

Flying across many time zones in the opposite direction (eastward) can present a more challenging re-adjustment. Flying across seven time zones to the US West coast, for instance, requires an advance of the body clock (re-timed earlier).

This is the same type of change needed when we go onto daylight savings time in the spring. That causes some disruption of sleep and daytime alertness for a few days in many people. Now multiply that change by seven times and it will give you some perspective on this jet lag disruption.

Upon arriving at your US West Coast destination, your body clock timing will be seven hours too late. The time of your Tmin may be as late as 11am instead of 4am. Your body won’t be ready for sleep until the wee hours of the morning and it will want to sleep most of the day away (an extreme example of the delayed sleep pattern of many adolescents).

Again, light can be used to re-time your internal clock. To maximise the re-timing effect you should avoid very early bright light up until about 10am because being before your Tmin it might shift your clock in the wrong delay direction. Instead you should get bright light preferably for several hours starting around 10am.

Then, as your body clock becomes timed earlier the beginning of the light stimulation can start earlier (8-9am) to complete the re-alignment job.

Taking melatonin can also assist this re-timing process: a low-dose (0.5-1mg) short-acting preparation (available over-the-counter in the US or by doctor’s prescription in Australia) taken at the desired bedtime in your destination. In conjunction with appropriately timed bright light, melatonin can greatly reduce the duration of your jet lag.

But should you even attempt to re-time your body clock? That depends on how long you’re staying in the new time zone. If your stay is short (one to three days), it may be less disruptive to not go through any re-adjustment but simply keep your body clock on “home” time. That way you also avoid re-adjusting again when flying home. Most airline flight crew follow this rule.

But if your stay overseas is going to be at least a week and if you want it to be more pleasurable, you can minimise jet lag by appropriately timed light stimulation and melatonin.