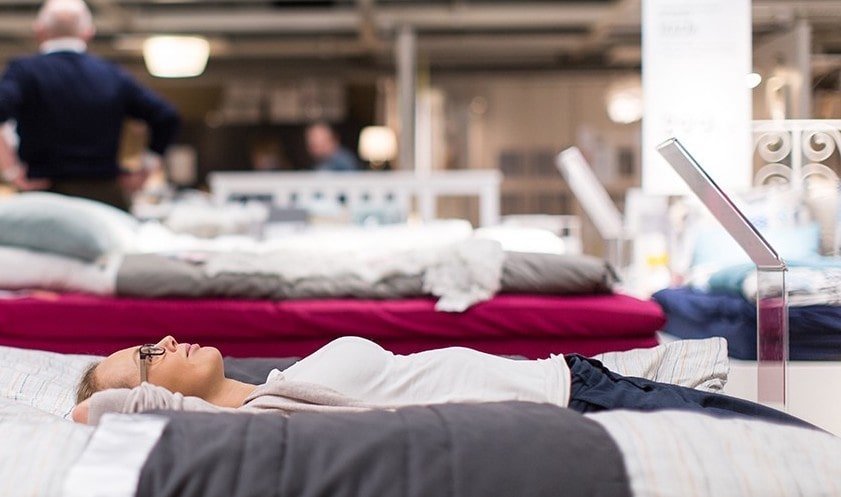 A mattress is one of the biggest household investments you’re likely to make.

Choosing the wrong one doubles that cost (and that’s an understatement).

How about that fight you might have with your partner because you woke up hot under the collar?

What about that dent on the car bumper you made backing out of the driveway half-asleep?

If that doesn’t dilate your pupils and wakes you up (pun intended) to the importance of knowing every-single-thing there is to know about the process before you step through the door of that mattress store, I don’t know what would.

Great, yet another article that will tell me to “choose the right firmness”

Nope, none of that today, you don’t need me to tell you what feels right.

You might, however, need me to tell you about what goes on in the mind of the salesperson that’s on the other end of the stick.

About the ways you’re being “nudged” towards spending more than you planned on a mattress that might not be right.

You see, I spent almost a decade of my life in the mattress industry.

I was not a salesperson but, as a marketing guy, I attended all of the more important meetings of the core sales team. I know the INs and OUTs of how the industry works…the lingo, the techniques designed to get you to spend more , the “trigger” words and more…

Let me be clear, I am not saying that the sales people are some sort of evil masterminds, they are doing their job.

What we’ll try to do here is make sure them doing their job doesn’t mean you’re getting the short end of the proverbial stick. So, enough talking…. let’s dive in:

Sure, you can spend a day reading on it, but let me save you some time and summarize what 95% of articles will tell you.

You walk away from the computer or put down your phone with the self-assuring impression that you are somehow more prepared to make a decision. But if you tried to summarize the advice you got it would probably look something like this:

“Get the mattress that’s best for you.”

Like there was a chance for you to miraculously decide to get a mattress that’s best for your neighbor….

Dressing for the occasion

One of the first lessons of a sales training is to forget what you’re selling and think about who you’re selling it to. Remember those scenes from movies when the main character is asked to sell a pen to some big shot.

There’s more truth to that than you think.

As you walk into that store and a salesperson engages you in a casual conversation about the weather and you exchange pleasantries, the last thing on their mind is the weather.

They are looking at you watch, your clothes, jewelry, hair…within 20-30 seconds of talking about the weather; they’ve made their decision about how much they can push you to spend.

What to do about it – the first mistake people make when they go mattress-shopping is dressing up. You have your most expensive watch or earrings on, the finest shoes, your hair is freshly done or your beard finely trimmed.

Forget all of that.

You’re not there to impress the person you’ll see for the first and likely the last time in your life, you’re there to get the biggest bang for your buck. So, no giveaways, even if you are rich, – no watches, jewelry, expensive shoes…give them nothing.

How this one can backfire – what we said above doesn’t mean that you should wear the thriftiest stuff you have or make yourself look poor. In this scenario, they might decide to sell you on the lowest quality mattress they have or that last floor piece that’s on a 50% sale discount.

Wear a shirt that, as far as anybody can tell, could come from a 3-for-2 packs from Walmart or could be an expensive designer piece. Slip on those shoes that are neither new and shiny nor worn-out, the kind of stuff you’d wear grocery-shopping…you hopefully get the point.

Poking your way around the minefield of sales techniques

This is the part of the guide you should get most takeaways from. We’ll get into a few sales techniques, some of them common with little trickery involved, some of them outright shady – designed around proven psychological loopholes.

Calculate your options, but don’t share them just yet

You probably have a budget in mind but don’t share it with the salesperson too early in the process.

What you can share is the type of mattress you’re looking for, whether it’s innerspring, latex, memory foam or something else (given, of course, that you already made the decision, which should be the case).

Once you’ve zeroed in on the part of the store where your future mattress lives, that’s when the “fun” begins.

Ask them for their opinion

If you read the rest of the guide, you’ll know your stuff for each mattress type. For this part of the process, focus on determining how shady (or not) the techniques of the salesperson are.

Without sharing your budget, ask them to tell you about their top picks in a few price ranges (a range above and below the price you have in mind).

Then ask what’s better about their top picks in the price ranges. Act like you know very little about any of the stuff they’re talking about.

Before that part of the conversation ends, you’ll know how honest you can be with this person. Again, to do that, you’ll have to know the “substance” of what makes a good mattress, which we’ll talk about more in the second part of this guide.

‘Buying’ techniques – turning it to your advantage

The time relativity tech – when 15 minutes feel like an hour

This one relies on a tested and proven psychological gimmick. What it comes down to packing as many things/places/models into your time.

One example of this technique is buying shoes – a  shoe salesperson will bring out 3 different sizes of each pair you’re interested in, and within 7-8 minutes, you’re surrounded by boxes and feel like this person has tried so hard to please you.

If you just walk away without buying, they’ll have to do even more to pack all those boxes and take them back to the storage.

You feel the pressure mounting, and you decide to get the shoes even though they’re not really right. Not a big deal. You’ll just give the shoes to a friend.

But what about buying a mattress?

Avoiding it – Being aware of the technique and prepared not to feel guilty no matter how many models they show you should do the trick. Every now and then, take a look at your watch; you’ll notice that you’re not there nearly as long as it feels.

The perceived value technique aka ‘The principle of contrast’

This one goes by many names but, among salespeople, it’s known as the “principle of contrast.” It’s the name that Robert Cialdini attached to it the famous book “Influence: The Psychology of Persuasion.”

It relies on the fact that a product is only as valuable as you perceive it to be. There two main forms the technique can take in a mattress shop:

i) The sudden “I-didn’t-know-about-it” discount

Because they can only do it once, it’s usually applied when the salesperson sees that you’re on the tipping point of making a decision.

A colleague from behind the counter might casually mention that the mattress happens to be the last one in stock and it’s on a 30% discount. That’s rarely the case.

Usually, there’s a well-crafted plan to recognize the tipping-point, “push” you over the line and close the sale.

It works amazingly well, if you were just about ready to get it for $1,000, the 700 you’ll pay will feel like a bargain.

As we said, it’s all about perception. The salesman already has a number in mind before showing you a mattress.

If they think they can “squeeze” a grand out of you, they’ll first take you to the part of the shop where the 3K models live.

If they show you a mattress that’s priced at 2K and then take you to one that’s half of that the perceived value of the second mattress dramatically increases – because the cheaper mattress will be seen to be lacking some features (usually something you don’t care about anyway, like being waterproof).

What you can do: Determine the value of a mattress type before they do it for you, do your research and ignore the price games.

iii) Beware of the silences – the guilt pressure technique

I like to call this one the “I’ve-had-enough-of-you.” It will usually come in two forms – an awkward silence or a tired sigh.

A less aggressive salesperson will go with the awkward silence. After 15 minutes of being the kindest guy/gal in the world and showing you 25 different mattresses, they might go silent for 5-10 seconds. They’ll also probably cross their arms or lean against something, to indicate how tired they’re getting.

Because silence exerts pressure. They know that the silence speaks volumes in your mind. It says stuff like, “I’m giving this poor man a difficult time,” or,”I’m a difficult customer.”

If you’re not alone, you’ll try to share some of that pressure with your partner by asking them, “What do you think?” The silence will continue.

The salesman is not really that tired; they just know the power of guilt.

A more aggressive approach (one they only take if their estimate is that you’re mellow and won’t storm out) is a subtle but noticeable sigh.

If you are mellow and yielding, this puts even more pressure on you to spend money in a rush.

What you can do:  Establish the dynamics early on. You might mention that you’ve already gone to two different stores and spent an hour in each. This lets them know that you’re a cautious buyer who won’t be “guilted” into a purchase.

The blind spots by mattress type

Of course it’s all very well knowing about these sales techniques but in order to make in informed choice you’ll also have to know your stuff about each mattress type.

That’s what we’ll look at in part two of this buying guide, delving deeper into the real facts about innerspring, memory foam and latex mattresses.

For example, we’ll talk about the confusion surrounding memory foam and why knowing the density and thickness is not enough and what you should look at instead when getting a memory foam mattress or topper that would be the best bang for your buck.

We will bust a few myths, burst a few bubbles and, again, crack open a few cans of marketing worms.

James Menta is editor in chief of 3Beds.com, a website where his team and a few handpicked testers review air mattresses and other sleep products. His wellness and sleep-related articles have been published in a number of reputable online publications such as the ElephantJournal, WorldOfLucidDreaming, HikingTheTrail, PlanetD and many others.