Do you get the winter blues?

If you’re the kind of person who feels the winter blues more than most, you could be experiencing the effects of seasonal affective disorder (SAD). This recognized medical problem affects up to 10% of the population in the Northern hemisphere, and the list of symptoms include sleep problems, lethargy, loss of libido, depression and over-eating.

To some extent SAD is a normal reaction to the shorter, darker winter days – even animals are affected by the change in seasons. But for around 2% of the population, SAD can be a debilitating, even chronic condition, affecting phsyical and mental well being, and causing strain in relationships.

One of the best ways to treat SAD – without resorting to medication – is with light therapy. This essentially means exposing yourself to a special, controlled source of bright light. The treatment is simple, non-invasive and has a high success rate in alleviating SAD symptoms.

Light therapy is also effective at helping people with sleep problems. Because daylight is one of the main zeitgebers (environmental cues that keep our body clocks in sync), light therapy can help with a range of problems from jet lag, late-chronotype (ie night owl) tendencies and age-related sleep issues. 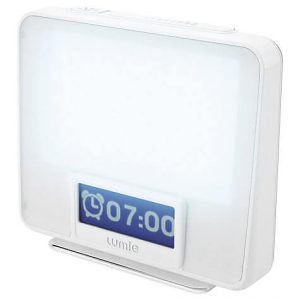 Lumie, a British company have been making light therapy products since 1991. The Lumie Bodyclock – an alarm which wakes you up with increasing levels of brightness – was the world’s first wake-up light and  brought light therapy into the mainstream.

Over the years Lumie has worked closely with the scientific community, sporting bodies and the UK’s National Health Service (NHS) to produce a wide range of light therapy products. All of Lumie’s devices are medically certified and are used in hospitals all over the UK.

Lumie’s latest product is a 2-in-1 device, combining a standalone SAD light with a wake-up alarm that functions as a dawn simulator. The  Zest is a break from the traditional rounded curves of the BodyClock, opting for a more compact, rectangular design.

This suits the dual purpose nature of alarm and SAD light – the Zest takes up hardly any space so you’re free to use it almost anywhere you like.

In keeping with the space-saving design, Lumie have gone for quality over quantity when it comes to features. This stripped down approach means there’s none of the frills you’ll find on other Lumie alarms such as a radio, MP3 players, or choice of alarm sounds.

The Zest is a more stripped down affair, almost minimal in comparison. If Apple were to make a light-therapy product it would probably look quite similar to the Zest. The front of the unit just features the LCD display and the LED light array. There are two buttons on the top; one to activate the ‘sunrise’ function, plus a snooze button.

Four additional recessed buttons at the rear let you delve into the settings and other available modes. These include the alarm time, final sunrise brightness, sunrise duration (15 or 30 minutes), alarm volume and display brightness.

In light therapy or LT mode, the Zest functions as a standalone SAD light. Again you have control of the brightness and the length of your LT session (from 1 to 99 minutes).

A single lead with a small USB connector powers the Zest. There’s no battery so you need to keep it plugged in at all times, however, if you do need to move it the clock will keep time for around 30 minutes.

Using the Zest as a dawn simulator, the idea is to place the device in an upright position, facing towards you. Once you’ve set your desired alarm time, all you do is press the sunrise button at the top and wait for the ‘dawn’.

If you’re serious about your sleep you should also set the LCD clock display to OFF to avoid an annoying glow at night.

A word about lux

Lux is the standard unit for measuring the amount of visible light ( ie brightness). A typical bright sunny day will measure 100,000 lux or more, whereas a typical office will be around 500 lux. Light therapy has traditionally only used lamps that emit 10,000 lux, the minimum that was thought to make a difference to SAD sufferers.

However, recent research has shown that lower intensity lights that feature blue-enriched white light can be as effective as lights with 10 times as much lux. This is because blue light has the special property of limiting the production of melatonin, the hormone we produce at night which promotes drowsiness.

Blue light also acts as a trigger to produce cortisol, a hormone promotes wakefulness amongst other responses (which, incidentally, is why it’s a bad idea to use blue-light rich computer screens late at night).

The Lumie Zest is verified to produce around 2000 lux at a distance of 50 cm, much less than the standard of 10,000 lux for most SAD lamps. But because the LEDs in the Zest provide extra output in the blue light spectrum they pack an extra punch with regards to stimulating your internal body clock into wakefulness.

The Zest in action

So how did the Zest work in practise? Well, over the period of a couple of weeks in December I put the Zest through it’s paces, setting the alarm to coincide with the actual sunrise time in London.

Whilst I don’t particularly suffer from chronic SAD, I do have a late chronotype, which means that I’m definitely more of an owl than a lark. So getting up early on dark, cloudy mornings in winter has never been my strong point.

But with my new artificial dawn simulator, I found  that the subtle incremental light output from the Zest (I used the 30 minute setting) produced a surprisingly realistic approximation of natural morning light – like someone gradually opening the curtains very slowly on a bright sunny day.

The effect was very pleasant, a gentle but stimulating way to start the day. I decided not to use the audible alarm to test if the LEDs were sufficient to wake me on their own.

This proved not to be the case – just using the light failed to totally wake me from my slumber, however in combination with my regular alarm clock, the Zest was brilliant at shaking off the winter morning blues. (Interestingly my partner, a lark, who doesn’t share my resistance to early mornings, found that the Zest was very effective at waking her up every morning!) 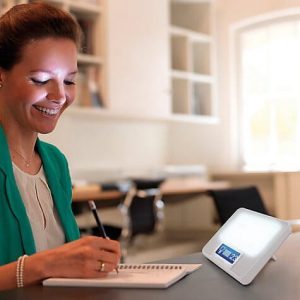 In LT (light therapy) mode, the Zest is designed to be used when you’re up and about, whether you’re at home in the kitchen, at your computer or sitting at your office desk. A detachable stand is used to place the device at a 45 degree angle to beam the light into your face.

Personally I found this to be less useful, but then again I don’t really suffer from SAD in a big way so I didn’t feel a huge difference.

Who is it for?

The Lumie Zest is suitable for anyone who has a hard time getting out of bed on those dark, dreary mornings. It’s also small and portable enough to carry around if you’re travelling, jetlagged and need to reset your body clock after crossing a few time zones.

Or, you might just need a light therapy session to give you a boost at breakfast, or maybe even sitting at your desk at the office.

The main selling point of the Zest is it’s versatility, a wake-up light and SAD lamp rolled into one. Its understated design equally suits the bedroom or workspace. The product feels solid too, demonstrating the decades of experience that Lumie has in making these types of devices.

On the downside, the power cord is a bit short and it would be nice if there was a battery to extend the life of the clock when the unit is unplugged. I also found the rear buttons a bit fiddly at times, but once you’ve set the device up this isn’t really an issue.

So, would I buy one? If you asked me a couple of years ago I would have strongly considered making a purchase. However as I’m now the proud owner of the world’s most effective wake-up alarm, ie a young toddler who likes to jump on/throw random objects at my head every morning, I no longer find getting out of bed a struggle.

There are other competing devices out there – Philips makes a range of sunrise alarm clocks too – but the Lumie Zest is as far as I know the only portable combination wake up/ SAD light currently on the market. The price (as of Jan 2014) is £125, and if you buy direct from Lumie, you get a 30 day home trial, after which if you’re not satisified you can get a refund.

I hope you enjoyed the review. Feel free to ask any questions in the comments section below.

The author received no financial compensation for this review. The words and opinions expressed here are solely the authors.