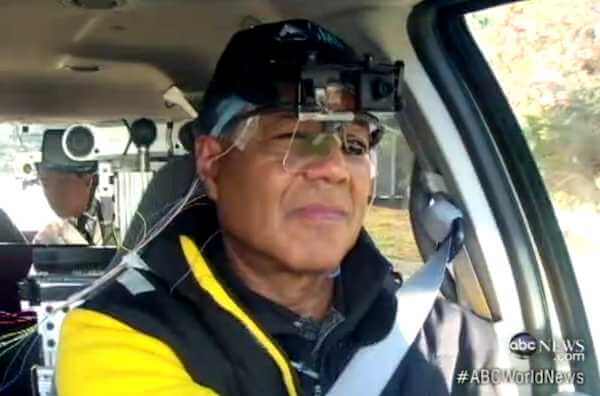 It sounds incredible, but every day up to 250,000 drivers in the United States spend part of their journey asleep, according to a report from ABC News. To highlight the rising phenomenon of drowsy driving, veteran reporter Ron Claiborne took part in an experiment to investigate the effects of sleep deprivation on driving performance.

Every year, thousands of accidents are thought to be the result of drivers not getting enough sleep.

But you don’t need to be fully unconscious to fall asleep at the wheel. An alarming phenomenon known as microsleep can cause drivers to nod off briefly, even with their eyes wide open!

During microsleep, which can last from a few seconds to a couple of minutes, the brain switches off momentarily, resulting in a loss of attention, head snapping, and/or a blank stare.

A study on sleep deprived rats  found that microsleep-like behaviours were the result of neurons going ‘off-line’ in the brain in one area, whilst the rest of the brain stayed awake.

The same effect seems to occur in humans caught ‘micro-sleeping’. Often, the individual is completely unaware they’ve briefly nodded off, and this can have catastrophic effects if they happen to be in the driver’s seat.

In the ABC report (see video), the reporter stayed up for a whole 24 hours, then scientists hooked him up to EEG sensors to measure his brain activity during a controlled driving experiment.

The results recorded 22 separate microsleep episodes. Although appearing wide awake with both eyes open, brain activity at the time indicated he was clinically asleep.

So next time you decide to hit the road when you’re sleepy, bear this in mind. You might actually be falling asleep at the wheel without knowing it.