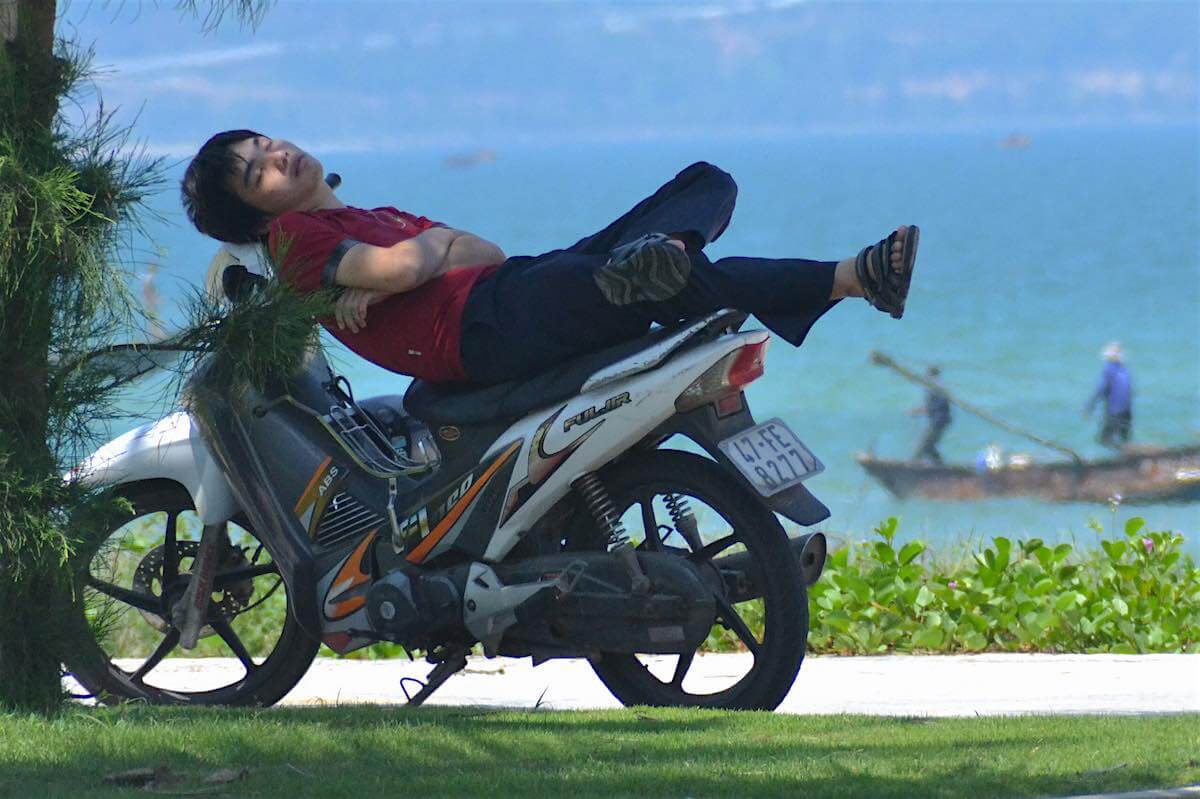 If napping makes you feel lousy, maybe you’re doing it all wrong

Daytime naps can work wonders for your health, energy and productivity. That is, if you can get it right...

According to Benjamin Franklin, the only two inevitabilities in life are ‘death and taxes’. Perhaps a 21st century version of the famous quote should include a third certainty – sleep loss.

Whatever the cause – a crying baby, a 12-page essay, work stress, or 3am texting under the covers – all of us succumb to sleepless nights from time to time.

But missing out on zzzz’s doesn’t mean we have to endure drowsiness and lack of energy through the day. There’s a simple, easy solution…..

[toc]Great men of the past like Winston Churchill, Napoleon Bonaparte, and John F. Kennedy never failed to get their midday shut-eye. The benefits of napping have been known about since antiquity it’s still commonplace in many countries including Spain and the Philippines.

Thanks to an increasing body of scientific research, even the corporate world is starting to embrace napping as a way to increase employee well-being and boost productivity at the same time.

Not only does napping re-energize the restless. But napping, when done right, is simply good for you.

Don’t try this at home

First, let’s get this straight.

Daytime naps are a supplement to nighttime sleep, not a replacement!

Fans of polyphasic sleep on the other hand, insist that an 8-hour snooze at night can be replaced with a carefully timed series of multiple naps spread throughout the day.

For writer and producer Tim Zimmerman, the attempt turned him into a ghoul. One who can’t even make a pot of coffee! Life coach Steve Pavlina, on the other hand, switched back to monophasic sleeping after 5.5 months of polyphasic sleeping. The reason? Taking multiple naps gave him more waking hours but ruined his social life.

Many polyphasic sleep advocates point to a seminal book ‘Why We Nap’. Its author, Dr. Claudio Stampi is the authority on polyphasic sleep, having published over 100 research papers on human performance and sleep, as well as advising NASA, CEO’s and elite round-the-world sailors. Yet the reputable sleep researcher himself said:

“What is being proposed here is not that polyphasic sleep is preferable to monophasic sleep, nor that everyone should now switch to a multiple napping behavior “panacea.” It appears obvious that quasi-monophasic sleep — monophasic sleep plus occasional naps — is what comes most naturally to the majority of adult humans and a few other species.”

In my search for recent studies about multiple naps replacing one big chunk of nighttime sleep, only one turned up. The researcher concluded that polyphasic sleep increased his mental performance. But the experiment only had one subject, and it was the researcher himself!

On the other hand, studies about the benefits of consolidated sleep abound. One even had a sample size of 1.3 million people, with the researchers concluded that 7 to 8 hours of shut-eye results to longevity.

So now we’ve got that out of the way, let’s check out some of the science-backed reasons for napping – especially if you’re sleep-deprived.

Researchers from Flinders University’s School of Psychology found that even 15-minute naps can reduce sleepiness and boost cognitive performance immediately. And the effects can last up to 3 hours. Longer naps, on the other hand, may lead to impairment for a short period, but then lead to a cognitive boost for hours on end.

Are you about to take on a tough project at work or school? Taking a nap may give you the grit and self-control you need to survive the day.

In a study involving 40 participants, researchers from the University of Michigan concluded that napping can lead to better emotional control and tolerance for frustration. The participants were randomized into a nap or no-nap condition and were given a frustration tolerance task.

The end of the test saw the nap group exhibit increased tolerance while reporting lower impulsivity than the no-nap group.

The more all-nighters you pull off, the more likely you are to succumb to diseases. Studies have shown that T-cells go down with sleep-deprivation according to Diwakar Balachandran, the director of University of Texas’ Sleep Center.

But sleep researcher Brice Faraut hinted that napping can boost one’s immune system and alleviate the effects of stress. After a 3-day session of sleep tests, Faraut and his team collected urine and saliva samples from participants.

Today’s knowledge workers have to process many (and often unrelated) bits of information to do their jobs. If you often find yourself fumbling for details you’re supposed to remember, a post-learning nap can your memory consolidate the material.

Researchers from the United Kingdom found that both nighttime sleep and daytime napping aid the memory in processing recently learned material, which are susceptible to forgetting.

Getting into college is hard. But it’s a drop in the bucket compared to the circus act university students need to perform. Between binge-watching on Netflix, piles of research papers, and growing to-do lists, sleep doesn’t get the attention and hours it deserves.

Unsurprisingly, a poll by the Associated Press and mtvU found that 8 out of 10 students report feeling stressed, and many suffered from low energy and even depression.

While napping is not a replacement for a full nighttime sleep, it can help college students (and busy folks as a whole) recharge their batteries and brighten up their moods.

A study published in the Journal of Abnormal Psychology found that longer afternoon naps lasting from 1.5 to 2 hours led to a significant boost in reaction time performance, energy levels, and mood among university students.

Putting it into practice – get your nap on

We’ve seen the research-backed benefits of napping. But before you hit the sack, know that there’s more to the practice than closing those tired eyes.

First, you want to examine the reasons why you’re losing sleep. For insomnia sufferers, for example, napping in the afternoon is ill-advised as it shortens their nighttime sleep requirement. If you belong to this group of people, enduring daytime sleepiness might be the best course of action for better sleep continuity.

And second, you don’t want to miss some tried and tested techniques to get more out of your brief shut-eye. If you’re a coffee-lover, tip number 4 will delight you!

1) Want to wake up refreshed? Nap for only 20 minutes

Long naps are good for you. Getting slow-wave sleep (up to 60 minutes) can help improve decision making skills, while a 90-minute nap helps create new connections in the brain. However, long naps put you at risk of sleep inertia -the groggy sensation when you wake up during slow-wave (deep) sleep.

Not to mention long naps are harder to fit in a jam-packed schedule. So, if you want to wake up alert and still have enough time to handle the day’s work, take a 20 to 30-minute nap.

In a study by NASA, pilots taking in-flight naps of up to 26 minutes (with the co-pilot taking charge of course!) enhanced performance by 34% while boosting overall alertness by 54%.

2) Take a nap after 6 hours of wakefulness

Our bodies are governed by a 24-hour clock better known as the circadian rhythm. This internal clock is responsible for many behavioral, physical, and mental changes we experience during the day, including our cortisol levels.

Cortisol is a hormone associated with wakefulness. At around 8 to 9 in the morning, we reach our peak cortisol level, but it takes a dip after 6 hours of wakefulness.

Taking a nap at around the same time not only cooperates with our circadian rhythm. But doing so also leads to better gains in visual reaction time than taking a nap later in the day.

4) Get in the right mental state

When you lie down to take a nap, you want to forget about (at least temporarily) the day’s worries – the pending paperwork, taxes to file, the untended lawn, and everything else. Taking a nap is impossible if your mind is racing and anxious.

If you’re having a hard time calming the mind, take deep breaths through your nose for a few minutes while observing the tactile sensations in the process. According to Dr. Herbert Benson, deep breathing is one of the more reliable ways to trigger the relaxation response.

Along with a calm mind, you also want to create the right environment for your nap. Start by turning off the lights and any source of noise as these two factors can get in the way of rest. For good measure, grab a sleep mask and a pair of noise-canceling earplugs.

5) Grab a cup of coffee before napping

If you’re a huge fan of Mr. Joe, you’re probably debating whether a cup of coffee or a nap is better for recharging your drained batteries. Stop the internal debate! Why pick one when you can enjoy both!?

Decades of research have revealed coffee’s numerous health benefits – from a potent anti-cancer to a performancer enhancer for runners and gym-goers. But coffee, when taken at the right time, can also help you get more out of your quick afternoon slumber.

To better understand how a caffeine nap works, let’s take a closer look at how caffeine works and its relationship with adenosine.

Adenosine is a side effect of brain activity. And when we accumulate enough adenosine levels, we feel tired.

Caffeine, on the other hand, is the primary stimulant in coffee. It keeps us awake and alert by fitting into brain receptors normally filled by adenosine. However, caffeine has 2 shortcomings. First, it takes about 20 minutes to kick in. And second, it doesn’t fill all of our adenosine receptors.

Even 20 minutes of shut-eye clears all adenosine from the brain naturally.

When you consume coffee just before napping, caffeine will have fewer competitors for the receptors, enabling the world’s favorite drink do what it does best but better!

So next time you’re feeling tired and sluggish, don’t choose between coffee and napping. Do both instead!