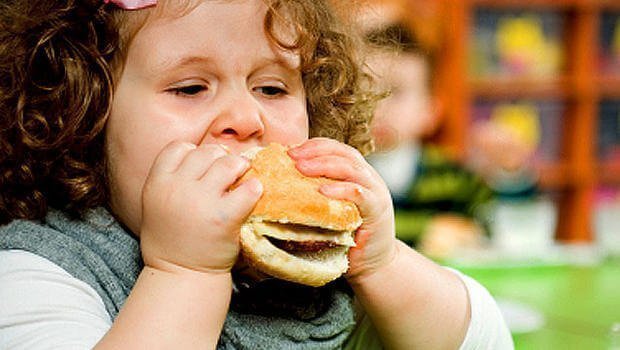 Sleep and hunger are among our most basic needs – and changes in one area most certainly causes changes in the other. In the past, we have discussed what happens to adult eating habits when we skip sleep.

Our chart on the role of sleep deprivation in adult obesity explains how losing sleep can lead to weight gain in adults for a number of reasons.

READ MORE: How poor sleep lead to weight gain – explained in one chart

We’ve also discussed how our lack of sleep fuels unhealthy food choices in general, and how we can eat better by sleeping better.

However, most of this research has been conducted on adults. Until recently very few studies discussed how sleep affects the diets and health of young children.

Children who sleep less have a higher BMI

That’s not to say that there’s no research that links sleep quality and weight in young people. For example, in one study, the researchers tried to draw a  relationship between children’s sleep duration and their BMI (body mass index).

Related research by Van Cauter and Knutson reviewed a large number studies related to sleep and weight. As they analysed trends, they found that adults and children alike were sleeping less and weighing more. Their paper concluded that:

In recent years, sleep curtailment has become a hallmark of modern society with both children and adults having shorter bedtimes than a few decades ago. This trend for shorter sleep duration has developed over the same time period as the dramatic increase in the prevalence of obesity. There is rapidly accumulating evidence from both laboratory and epidemiological studies to indicate that chronic partial sleep loss may increase the risk of obesity and weight gain.

According to national guidelines young children need about 10 hours of sleep and adolescents need about 9. But the trends suggest that children just aren’t getting the sleep they need. And when they sleep less children and adults alike are more hungry.

The researchers also saw other unhealthy changes for short-sleepers of all ages and genders – including impact on hormones, weight, and BMI .

Many of our food and sleep habits are formed at quite an early age. This means that what we eat and how much we sleep as preschoolers can predict how such behaviors well into adulthood.

So what happens if young children start sleeping less?

New research published in September 2016 is helping us understand how young children are directly and instantly affected by sleep deprivation. Researcher Mullins and her team have established the impact of just one day of restricted sleep on the diet of 3-4 year old children.

The small study had five girls and five boys who usually got plenty of sleep including regular afternoon naps. For five days, all 10 children followed a schedule that included adequate sleep.

Then, for one day, the children were kept awake for about 3 additional hours, including denying them their nap. The next day, the children woke at their usual time (although later they were allowed to sleep as much as they wanted to recover).

The children’s sleep patterns were monitored by using small activity bands. In addition, parents were asked to record everything the child ate, noting down the preparation style, portion size, and packaging details.

The researchers found that on the day the children were sleep deprived, they ate more. They actually consumed 21% more calories than usual; which included 25% more sugar and 26% more carbohydrates.

Even the next day, the children ate more than they otherwise would. Recovery day saw the children eat 14% more calories and 23% more fat. This means that the effects of sleep deprivation last for more than ‘just that day’. Summing up, the researchers said:

Findings suggest that acute sleep loss increases dietary intake in preschoolers both on the day of and the day after sleep restriction. Increased kilocalorie intake may promote weight gain over time and be a mechanism through which short sleep contributes to childhood obesity risk.

This simple study gives us some powerful facts. Children – just like adults – eat more when they don’t get enough sleep. They don’t just eat more on the days that are sleep deprived – they eat more over the next few days too. All this extra energy just gets stored, turning into extra weight over time.

The fight against childhood obesity has recognized the value of activity and healthy eating.

As more evidence piles up, it seems that it’s time to start recognizing the role of insufficient sleep in the childhood obesity epidemic.