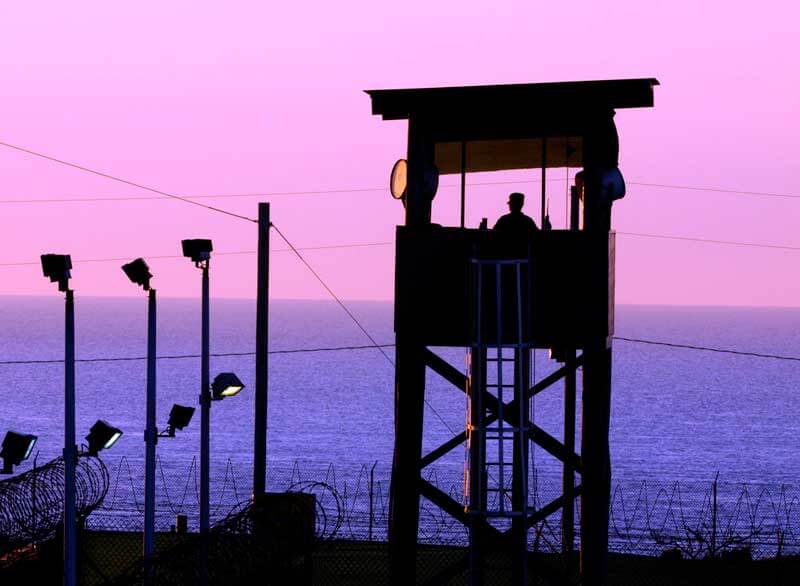 When was the last time you pulled an all nighter? Whether you were partying, working, or maybe it was your newborn baby keeping you awake – chances are you felt pretty messed up the day afterward.

Now imagine being forced to stay up for a whole week, without any food, chained by the wrists and ankles, wearing only a black hood and a diaper, whilst being sexually humiliated, threatened, and made to listen to kids TV themes 24/7 at deafening volumes. It’s not my idea of a good time.

Up until 2009, this was standard practise by the US military, a perfectly legal and ‘humane’ way to interrogate prisoners. But how did we get to this stage? Who conceived such bizarre forms of interrogation and why did the rest of the world just look on and accept this behaviour in the name of freedom and justice?

Sleep deprivation may sound quite tame in comparison with other forms of torture, but in the hands of an expert interrogator, it quickly renders someone open to suggestion, whilst reducing resistance to physical pain and psychological enquiry.

It doesn’t involve any direct physical harm so it’s often seen as one of the more ‘acceptable’ forms of torture. It leaves no scars, at least physical ones, and in recent years it has become one of the the preferred  methods of “torture lite” by regimes who claim to respect international law and human rights.

Keeping someone awake for hours or even days at a time is a highly effective way to ‘break the will’ of a prisoner, causing a whole range of undesirable ill effects from cognitive impairment, psychosis, breaking down the immune system and even causing heart defects and cardiovascular disease.

Unfortunately, there’s a trade off for the interrogating party. The more you deprive someone of sleep, the more likely they are to suffer memory loss, confusion, even hallucinations. So any attempts at “intelligence gathering” become increasingly fruitless as the detainee starts to break down, unable to provide truthful or accurate information

How Sleep Deprivation Affects The Body and Mind

It’s important to recognise the difference between acute and chronic sleep deficiency. Short term, or acute symptoms may result from losing a night’s sleep but you will likely make a full recovery after 2 or 3 days. Chronic sleep deprivation however happens when the sufferer is unable to make up their sleep debt, resulting in more serious physical and emotional symptoms. 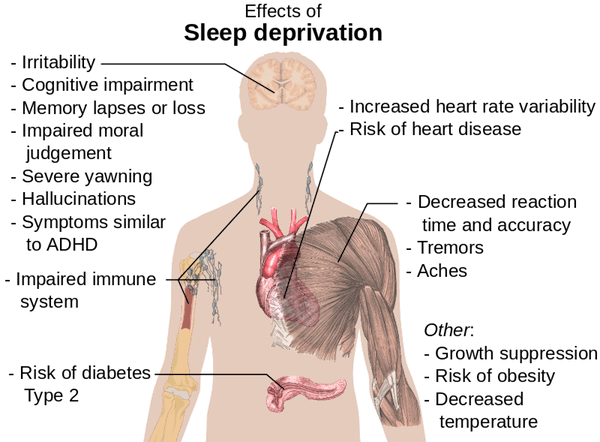 In a torture or interrogation scenario, sleep deprivation tactics are used to bring about a change in psychological state, although the associated effects on the body’s immune system and vital functions will undoubtably cause additional damage.

Lack of sleep brings about a number of neurobiological effects affecting reaction time, memory and and cognitive functions. It also has the effect of quickly bringing about hypnagogic hallucinations –  feelings of ‘altered reality’ caused by the incursion of REM activity into wakefulness. Prolong these conditions and it can lead to severe moral and emotional impairment and ultimately psychosis.

Can Sleep Deprivation Kill You?

Thankfully we live a world where science is constrained by strict ethical guidelines. So we’ll never know definitively whether or not a lack of sleep can be fatal to humans. However there are several studies on animals which demonstrate that staying awake indefinitely can indeed eventually kill.

In 1894, Russian scientist Marie de Manaceine started experimenting on puppies to test the effects of sleep deprivation on the brain. The outcome was unexpected in that all of the 10 test subjects died. She later recounted:

I have found that by experimenting on 10 puppies that the complete deprivation of sleep for four or five days (96 to 120 hours) causes irreparable lesions in the organism and in spite of every care these experiments could not be saved. Complete absence of sleep during this period is fatal to puppies, in spite of the food taken during this time..

Origins of Neuroscience: A History of Explorations into Brain Function -Stanley Finger (1994)

An experiment in 1898 with dogs showed similar macabre results. Italian scientists Lamberto Daddi and Giulio Tarozzi kept dogs awake by continuously walking them.  All the animals died after 9-17 days, the reasons for the deaths not fully understood.

In the 1980’s Allan Rechtschaffen set up some controlled experiments using pairs of rats as his subjects. One of the rats was allowed to sleep but the other was forced to stay awake at all times lest he fall into a pool of water.

The control rats remained healthy but of the ten rats subjected to total sleep deprivation, all died after between 11 and 32 days. The exact cause of the fatalities was a mystery, the report stating that “No anatomical cause of death was identified.”

Is Sleep Deprivation Really a Form Of Torture?

Mention the word torture and most of us form an association with some sort of physical violence. Images of arcane medieval contraptions spring to mind,  like the rack or the iron maiden. Or perhaps you’re picturing Laurence Olivier in Marathon Man attempting some rudimentary dental work . However, the United Nations Convention Against Torture spells it out in broader terms. It defines torture as:

“Any act by which severe pain or suffering, whether physical or mental, is intentionally inflicted on a person for such purposes as obtaining from him or a third person, information or a confession, punishing him for an act he or a third person has committed or is suspected of having committed, ..”

This begs the question, “does sleep deprivation cause severe pain or suffering?” Some powers that be would like you to think this is not the case. In the post 9/11  years, politicians and lawyers representing the Allied Forces argued that modern “enhanced interrogation techniques” were not torture.

At the time, the Bush administration sought to define torture as only the most extreme forms of physical and psychological abuse that resulted in severe, long-term harm. Some measures, it argued – even thought they were illegal under international law – were acceptable.

However, a 2007 study published in Archives of General Psychiatry -in response to reports of human rights abuses by the US military in Guantanamo Bay, Iraq, and Afghanistan – rejected these assertions, stating that:

“Thus these procedures do amount to torture, thereby lending support to their prohibition by international law.”

There is also a growing opinion that the current legal standard for evaluating torture is ‘psychologically untenable’ . Professor Loran F. Nordgren of Harvard Law School , in a report published in Psychological Science in 2011 stated that “People cannot appreciate the severity of interrogation practices they themselves are not experiencing — a psychological constraint that in effect encourages torture,”

A brief history of sleep and torture

Sleep deprivation as a form of torture goes back a long way. An Italian lawyer, Hippolytus de Marsiliis (b.1451), is credited with being a pioneer, adding sleep to the arsenal of the Catholic Inquisition. The idea soon gained widespread acceptance.

The globalisation of this phenomenon was demonstrated by revelations in 2008 that a study of Chinese Communist torture techniques was being used as training material for interrogators based at Guantanamo Bay. Here are some more examples from history. 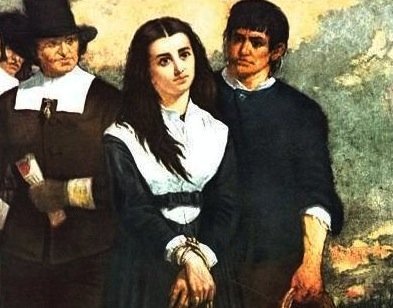 For nearly three centuries of early modern history, a wave of witch hunts plagued Europe and North America, fuelled by massive religious and social upheaval. Tens of thousands of innocent women were tortured and executed over this period for alleged sorcery.

Witch hunting in Scotland arrived in the 16th Century, their methods less violent than in Central Europe. One of the popular means to elicit confessions at the time was called “waking” the witch.

Those accused of witchcraft were forced to stay awake sometimes for days at a time, after which, in their exhausted, hallucinatory state, they would recount tales of flying, changing into animals or other fantastical scenes. This would be enough to convict the accused on the spot.

If a “witch” was obdurate, the most effectual way of obtaining a confession was by what was termed “waking her.” For this purpose an iron bridle or hoop was bound across her face with four prongs thrust into her mouth. The “bridle” was fastened behind to the wall by a chain in such a manner that the victim was unable to lie down; and in this position she was kept sometimes for several days, while men were constantly by to keep her awake.

In 1930, the former Soviet Union, during the Stalin era, established the Gulag, a network of forced labour camps, to preserve the function of the state system.

Approximately 14 million detainees passed through the camps, which were documented in a first hand account by Nobel Prize winning author Aleksandr Solzhenitsyn. Recounting the experience of prisoner Anna Skripnikova in 1952, he writes:

“ And if, back in her cell, after a night spent in interrogation, she closed her eyes during the day, the jailer broke in and shouted: ‘Open your eyes or I’ll haul you off that cot by the legs and tie you to the wall standing up.”

A similar account is told by former Israeli Prime Minister, Menachem Begin, who spent some time in a KGB prison in the 1940’s. In his memoirs he wrote:

“In the head of the interrogated prisoner a haze begins to form. His spirit is wearied to death, his legs are unsteady, and he has one sole desire: to sleep. Anyone who has experienced this desire knows that not even hunger and thirst are comparable with it.”

White Nights : the Story of a Prisoner in Russia – Menachem Begin

The “War On Terror”

Five days after the attacks on the World Trade Center in New York, Vice President Dick Cheney appeared on NBC television to discuss how America would deal with the perceived terrorism threat:

“We have to work the dark side, if you will. Spend time in the shadows of the intelligence world…..A lot of what needs to be done here will have to be done quietly, without any discussion”

Precisely what he meant is open to speculation, but it’s likely that the ‘dark side’ was at least in part a reference to what the CIA would later describe as ‘enhanced interrogation techniques“. This 21st century “torture lite” included waterboarding (simulated drowning), prolonged stress positions, hypothermia and indeed sleep deprivation (or sleep management to use the more friendly military term).

Although never officially admitted, it’s likely that the CIA tactics came about as a result of the US military’s SERE program (survival-evasion-resistance-escape), designed to equip soldiers with the skills to withstand enemy capture and interrogation.

An in-depth investigation by New Yorker magazine found that “several psychologists versed in SERE techniques began advising interrogators at Guantánamo Bay and elsewhere”, in effect ‘reverse engineering’ the SERE program. “They took good knowledge and used it in a bad way,” one of their sources quoted.

The US interrogators used multiple tactics to keep their prisoners awake. Operation Sandman, also known as the “frequent flyer” program involved moving prisoners from cell to cell every hour or two. “Monstering” was the term interrogators used in Afghanistan to play a game of ‘who could last the longest’ between prisoner and interrogator.

Another common and often bizarre technique was the use of loud music played 24 hours a day. Prisoners were subjected to everything from hard rock to Sesame Street at deafening levels, designed to drive them crazy.

Sleep deprivation was often combined with shackling. The prisoner would be chained up in either a standing or horizontal position or  sometimes in a chair, for up to 11 days at a time to prevent to the detainee from falling asleep.

19 thoughts on “A brief history of sleep deprivation and torture”