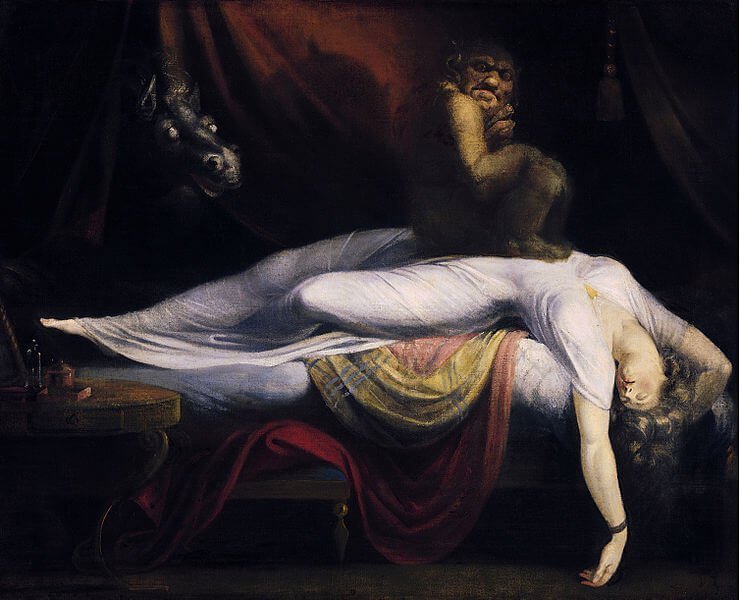 Imagine drifting through your dreams when slowly, you begin to become aware of your surroundings.

You realise you’re in bed awake and turn to move, except, you can’t move a muscle.

If that’s not frightening enough you being to sense there’s something or someone in the room with you – a shadowy figure starts to loom over your body, but you’re powerless to do anything.

It sounds like the familiar plot of a horror movie. But sadly, these experiences are all too real for people who suffer from sleep paralysis.

A 2011 study estimates that 8% of people will experience the condition in some way during their life: but with so many instances being written off as some other cause, the true number could be much higher.

What is sleep paralysis?

Sleep paralysis is a temporary inability to move or speak which happens when waking up, or falling asleep. A type of parasomnia, it can last anywhere between a few seconds to several minutes and usually happens when the person is supine (lying on their back). Sleep paralysis often occurs in patients suffering from narcolepsy.

Although it doesn’t cause any physical harm, the sensation of being unable to move can be very frightening and cause considerable anxiety. Many people experience additional symptoms which add to their trauma. These include:

These hallucinations are most likely anxiety related, however, their frightening nature has led to a number of myths and legends being spawned throughout history.

There are three key factors in a sleep paralysis episode which must all be present to make a diagnosis, according to the Sleep Paralysis Project:

These are the key features of a classic sleep paralysis episode. In reality, every sleeping person is experiencing sleep paralysis during their phasic REM phase – otherwise we would all be acting out our dreams!

The body shuts off and is able to rest, even though the mind continues working. In a sleep paralysis disorder, the atonia phase is accompanied by this unusual alertness and awareness – which can be extremely unnerving for the person affected, even if there are no other symptoms accompanying the episode.

Sleep paralysis is associated with REM (rapid eye movement), the phase of sleep where we do most of our dreaming. During this time, the brain shuts down all non-vital muscle groups in the body, most likely to stop us acting out our dreams.

Sleep paralysis occurs when there’s a mistransmission of neural signals, and the brain fails to reactivate the muscles, rendering the patient conscious, but completely paralyzed. It is an anomalous REM state and a sign that your body is not moving smoothly through the stages of sleep.

The exact causes of sleep paralysis are unknown, but genetics are likely to play a big part. Apart from your genes however there are a number of other risk factors that can increase the chance of occurrence. These include:

Sleep paralysis is a surprisingly common phenomenon, with up to 40% of the population having at least one incidence in their lifetime. Although it can affect men and women of any age, it usually first appears during the teenage years.

The ‘paranormal’ symptoms of sleep paralysis

The 2015 documentary ‘The Nightmare’ focused on sufferers of sleep paralysis disorders, and the terrifying experiences they have when they go to bed. It highlights how complex the condition can be, and how it blurs the lines between sleep, dreams, mental health – and even the paranormal.

In many cases, there will be additional symptoms which accompany the episode of waking sleep paralysis. These can vary in severity, and might appear as standalone feelings or in combination with others. They include:

How these symptoms manifest varies from sufferer to sufferer. Some may find the feelings to be vague and almost indescribable, while others experience terrifying events in grim detail. Either way, the feeling of complete immobility and total awareness will be present.

Sleep paralysis through the ages

Over the centuries, many people have sought explanations for this mysterious condition often attributing it to an “evil” presence. Various cultural interpretations have been handed down through the ages, from the evil incubus, to demons and alien abductions.  From Ancient Greece to Shakespeare there are countless mentions of phenomena that are now understood to be references to sleep paralysis.

One of the most common is ‘Old Hag Syndrome’ a folklore myth where the sleeper awakes to find an old hag, or witch sitting, or riding on their chest, rendering them immobile. Similar legends exist in virtually every culture around the world, suggesting that sleep paralysis is not an uncommon phenomenon.

It is now thought that many previous reported incidences of demonic possession, ghostly encounters and other horrifying visions are actually the result of aware sleep paralysis episodes.

There are many historical references to the disorder’s existence which date back to the 10th Century AD, such as the famous ‘night hag’ syndrome. It’s such a common occurrence that the phenomena has permeated the world of art and culture, as seen in Henry Fuseli’s famous painting ‘The Nightmare’

However, there is still no real understanding of the causes of sleep paralysis, making it a misunderstood and often undiagnosed condition. It is easy to see how a sufferer could mistake the incidents for some form of supernatural activity.

Often the visual hallucinations experienced represent common manifestations of scary figures – such as ghosts, demons, monsters and the dead (or even the undead).

The most common reported feeling with these sleep paralysis incidents is that of a presence in the room – a demon or similar being. Second is the feeling of being crushed, followed by the belief that an intruder had entered their home. Below are some comments from users of Reddit, describing their own sleep paralysis events:

“I saw a shadow-man walking around my room, disappearing behind my open door.”

“A little girl in the corner of my room staring at me. Then, without notice, she shrieks and runs up and starts choking me.”

“Even if I can’t see anything, there is an overwhelming presence in the room and it is always evil. I can’t move. I’m stuck.”

“Something banging and scraping on my bedroom door. I keep it locked at night because I have had ones where it opens by itself.”

There is currently no standard treatment available for sleep paralysis. There are, however, a few methods you can try to minimize the chances of an episode.

Most people require six to eight hours of sleep each night so this should be your starting point. Another way to improve your chances of better sleep is by going to bed and waking up at the same time each day. Other ways to practice good sleep hygiene include:

Adjusting sleeping habits is one step that can make a difference to some sufferers: change the room temperature, get a better sleeping routine and try to stay hydrated at night.

While the experiences of demons and spooky ghosts in the room feel realistic to the person, remember that all of these feelings can be explained through science. The feeling of suffocating, for instance, is explained by the fact that when you fall asleep your breathing becomes automated.

As you wake up suddenly in the middle of the night, you try to override this automation and start breathing on your own, which creates the suffocating feeling. Patients feeling overwhelmed by the symptoms might want to consider a therapy process, such as counselling or hypnotherapy, to help them cope.

If your sleep paralysis is more troublesome, your doctor may suggest a clinical treatment. Certain antidepressant medications have been shown to reduce the incidences of paralysis episodes, although it must be stressed that they do not work on every patient.

Tricyclic antidepressants (TA) and selective serotonin reuptake inhibitors (SSRI) -usually used to treat depression – are thought to have an effect on sleep paralysis by altering the amount and depth of REM sleep, preventing temporary paralysis on waking up/falling asleep. However, you should be aware of the potential side effects before considering a course of medication.

18 thoughts on “The nightmare of sleep paralysis demons, witches and ghouls”