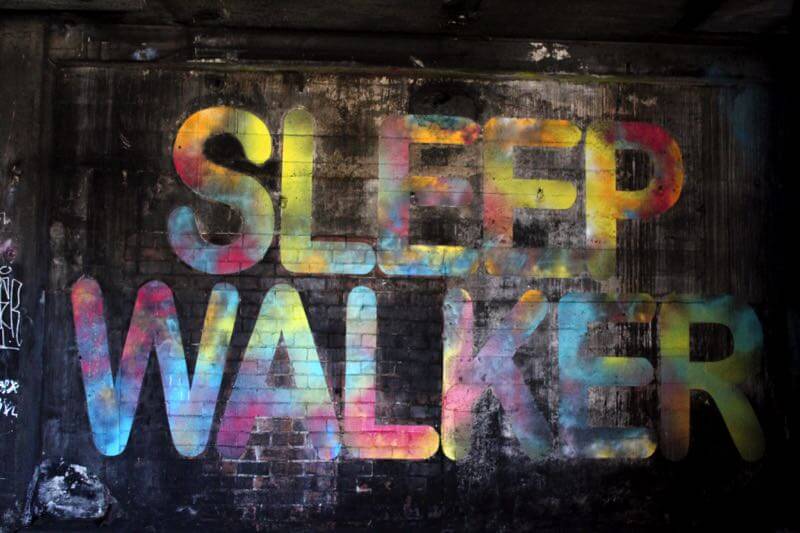 Sleepwalking can be triggered by a wide range of genetic, environmental and behavioral factors, and it may be difficult for an individual to pinpoint the exact cause of their condition.

The most common cause of sleepwalking is heredity. Those with a first-degree relative (a biological parent or sibling) who has experienced the condition are ten times more likely to experience at least one episode themselves. Identical twins are more at risk, and if one twin experiences an episode it is almost guaranteed that the other also will.

The root cause of sleepwalking is poorly understood, but it is known that sleep deprivation, an erratic sleep schedule and stress can all serve to increase the frequency of episodes. More commonly in adults, alcohol and drugs such as sedatives, neuroleptics, stimulants and antihistamines can also induce episodes.

Finally, sleepwalking can also be caused by medical conditions ranging from pregnancy and menstruation to sleep apnea, fever, arrhythmia and psychiatric disorders such as PTSD, panic attacks and multiple personality disorder.

While the environmental causes of sleepwalking are many and varied, the key factor is that all of these causes in some way disturb or interrupt the typical sleep cycle a healthy person runs through several times each night.

While the most common image of a sleepwalker is of slow movement and a glassy expression, in fact an episode can present in a number of ways that may leave an onlooker believing that the sufferer is fully conscious. Sleepwalkers are usually placid and subdued but in some cases they can appear frenzied, attempting to run or escape from some perceived danger.

A person experiencing an episode may respond to questions, but their responses will usually be slow and may be nonsensical. In almost all cases the sufferer will either have no memory of the episode upon waking or will have vague, unfocused memories. Rarely will a sleepwalker be left with a solid memory of events during an episode.

Sleepwalking is most commonly associated with children between the ages of 4-12, with 15% of this age group experiencing at least one episode. In general, sufferers can expect the condition to resolve by late adolescence, though in some cases the condition may continue or occasionally recur into adulthood.

Sleepwalking is common during the age at which children are learning to control their bladder during sleep, and as a result an episode may be associated with bed wetting.

The child may also urinate involuntarily or in an inappropriate location during the episode. Naturally this may cause embarrassment in older children when they become aware of their behavior.

Approximately 10% of sleepwalkers (or 1% of the population) experience their first episode as teenagers, and while episodes are usually sporadic and rare they can cause greater embarrassment than childhood sleepwalking.

Adult sleepwalkers seem much more susceptible to environmental factors than children, with drug and alcohol consumption playing an important role as triggers. Hormonal changes during puberty can trigger episodes, as can menstruation and pregnancy in women.Treatment for sleepwalking

Since sleepwalking is caused by a wide range of factors there are no effective medical treatments to cure the disorder. However, there are several things you can do to help reduce the frequency of episodes and attack the root cause.

Most importantly, sleepwalkers should make sure to get enough sleep and try to keep to a regular sleep schedule. When the body is accustomed to regular sleep an episode is less likely.

An attempt should be made to eliminate sources of stress. Meditation and relaxation exercises can help, and TV, Internet and video games should be avoided near bedtime. In the case of children it’s important to look at the home life and determine and address sources of stress within the family that may be affecting the child.
Alcohol and drug use should be kept to a minimum. If sleepwalking episodes correlate with a period of medication you should consult a doctor to determine whether there may be a link.

While episodes continue it’s vital to minimize the risk of injury. Sharp and potentially hazardous objects should be removed from the bedroom, and doors and windows should be locked and alarmed.

If possible, sleepwalkers should sleep on the ground floor of the home to reduce the risk of injury on stairs, and bunk beds should be avoided for the same reason. Toddler gates should be installed at stairways, especially if the sufferer is a young child.

If a sleepwalker is discovered during the night they should be led gently back to bed, where they will usually settle down quickly. You should never shake, force or yell at a sleepwalker during an episode, and it’s vital to ensure that the child does not feel embarrassed or ashamed of their actions.

By creating a safe space and offering care and support it should be possible to both keep a child safe during episodes and also, in time, to reduce the frequency until it is no longer a problem.