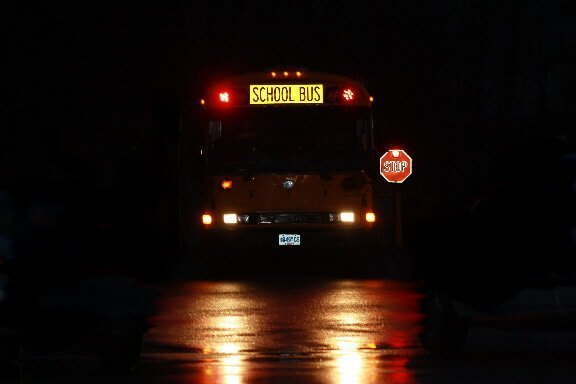 Interview: Should we be sending kids to school at 5am?

We talked to Phyllis Payne about Start School Later, the movement to improve early school hours

Children’s sleeping patterns vary wildly as they progress from babies to adolescence. Newborns need between 14-17 hours sleep each day according to official guidelines. This gradually reduces to around 7-8 hours sleep for an average healthy adult.

This is not only backed up by decades of sleep research, it’s entirely intuitive. As the child grows and matures, their sleep requirements adapt to accommodate all of the physiological changes occurring.

But what’s often overlooked is not the amount of sleep kids need, but how the timing of children’s sleep schedules differ, especially during the years of puberty.

The result is that children are expected to fit into a daily routine that suits normative adult sleep schedules, as opposed to what’s best for their developing bodies and brains. Hence school timings, instead of being designed around the needs of children, end up accommodating the standard 9-5 work routine.

This means that many children and teenagers are getting up far too early, because their not-yet-mature body clocks are essentially, at this hour in the morning, still in sleep mode.

In the last couple of decades, grassroots movements in the United States have recognised these facts, and have set out to raise awareness and build a case for the widespread adoption of later school start times.

This culminated in 2011 with the formation of Start School Later, a national coalition of parents,health professionals, sleep scientists, educators, students, and ordinary citizens dedicated to ‘increasing public awareness about the relationship between sleep and school hours and to ensuring school start times compatible with health, safety, education, and equity.’

Over the years, Start School Later (SSL) has made great leaps and bounds in advocating, raising awareness and effecting change regarding school start times.

To find out more we got in touch with Phyllis Payne who serves on the executive board of SSL about their work, and how ordinary citizens can get involved with the campaign.

A Q&A with Phyllis Payne of Start School Later

Jeff Mann (JM): Can you tell our readers how and why you got involved with SSL?

Phyllis Payne (PP): My first career was teaching 10th grade Biology. Then, I taught 7th, 8th, and 9th grade sciences. I moved to Japan to teach English for a year. When I returned, I decided I liked teaching different age groups (which I was able to do in Japan) and shifted to the health field. I went back to school to get a Master’s degree in Public Health, so I’m definitely looking through a lens of public health and sleep science/biology.

I first noticed this problem when my children were babies and the high school bus stop was in front of our house. I was up with a nursing baby and looked out the window in the pitch darkness and saw our baby sitters standing on the corner waiting for the bus. Horrifying. The more I learned about the situation, the more I realized how deleterious it really was for the children.

PP: Waking adolescent students during the wee hours of the morning (5:00 or 6:00 a.m.), before the roosters even begin to crow, is like waking an adult at 2:00 or 3:00 a.m. every day. We literally interrupt their natural sleep cycle and deprive them of sleep. REM sleep is concentrated in those early morning hours and we are cutting that short.

People invariably ask, “Why can’t they just go to bed earlier?” Adolescents in middle and high school generally need about 9 hours of sleep. If they must wake at 5:00 a.m., they should be in bed and asleep by 8:00 p.m. If waking at 6:00 a.m., bedtime and fall asleep time should be 9:00 p.m.

From a practical standpoint, 8:00 and 9:00 p.m. are impossible since many school-related activities are still scheduled at these hours and if students have after-school jobs, they might still be working (for example, if they work in retail, which is a common student employment opportunity).

From a biological standpoint, 8:00 and 9:00 p.m. are nearly impossible as well. The vast majority of students this age are not able to fall asleep this early. Melatonin, the hormone responsible for making us feel sleepy, doesn’t peak in the adolescent brain until about 11 p.m. and it remains in their system until about 8 a.m. — meaning that the natural sleep cycle for most students this age is from about 11 until 8 in the morning (9 hours!).

These same young people had a different sleep pattern before puberty and they will have a different sleep pattern as adults. As younger children, they were better able to fall asleep and wake earlier and as adults, they will be once again able to fall asleep earlier and wake earlier. The timing of the sleep-wake cycle changes with age.

There are a small percentage of early birds who may report being able to fall asleep by 9:00 p.m., These early birds may be early risers for their entire lives and this circadian trait is inherited, so there are whole families who can’t understand why other people have any trouble rising in time for a 7:20 a.m. school start.

On the opposite end of the spectrum are adolescents who literally lie in bed awake frustrated and worrying about how bad they will feel when their alarm rings. I have received calls from parents who are literally dragging their children out of bed. One mother reported that her son hit the floor and didn’t wake.

I’ve spoken to several adults who report that they dropped out of school because they couldn’t function. They explained, “I wasn’t a bad kid. I wasn’t out partying. I was in bed trying to fall asleep.”

People try to blame electronics and screens–anything that will provide an excuse to retain the current school schedules–but research shows that other mammals experience the same shift in circadian timing during puberty — and, these mammals aren’t exposed to the blue light of screens.

It makes sense to turn screens off an hour before bedtime and to create a quiet routine to prepare your mind and body for sleep, but even the best sleep habits can’t create a “peak” in melatonin that is needed to bring on sleep.

JM: What is the scale of the problems of early school times in the US?

We have so many schools that start before 7:30 a.m. and school buses are picking up children between 6 a.m. and 7 a.m. (and some bus stops are even before 5 a.m. — a transportation consultant in my district reported that the earliest bus stop was at 5:21 a.m. !!! You are not seeing a typo — that is a.m. not p.m. Would you send your child to school at 5am?

Many parents and community members in the U.S. are literally fighting to get to 8:00 a.m. The American Academy of Pediatrics and the U.S. Centers for Disease Control are pushing for 8:30 or later, but Start School Later is advocating for all schools to start after 8:00 a.m.

JM: Apart from students being more alert at school, are there any wider benefits for schools starting later?

PP: There are numerous benefits, here’s some info from our website:

The healthy, safety, and equity benefits to starting middle and high school at times more in sync with the sleep needs of students are irrefutable. Benefits include:

JM:What can readers do to help support the Start School Later cause?

PP: Donate! Start School Later, Inc. is a 501(c)(3) non-profit organization and all donations are tax-deductible.

You can also use resources on our website to share information and increase awareness about how teen sleep needs differ from the sleep needs of adults and younger children.

Here’s a link to the Start School Later resources page where you can download presentations, flyers, research and case studies and lots more.