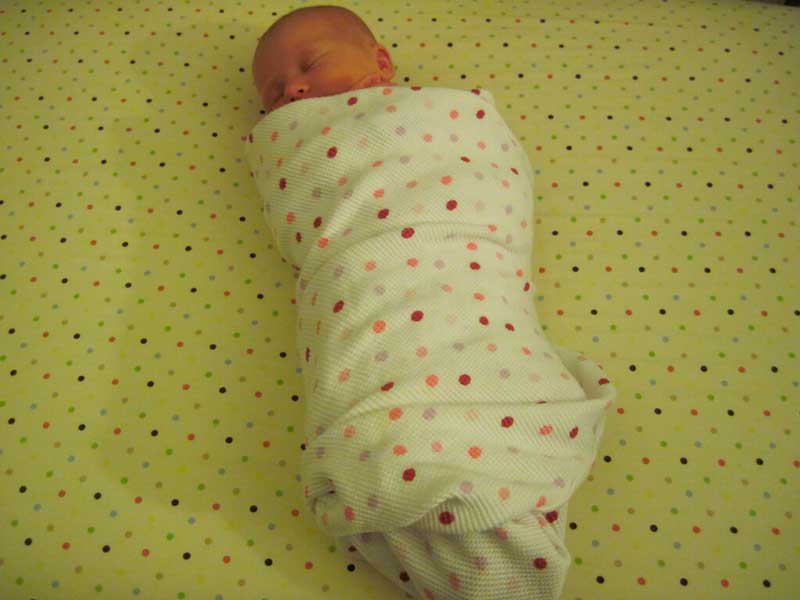 A guide to the ancient art of swaddling for new parents

Unless you’re a parent or you like to read baby books in your spare time, you’d be forgiven for thinking that swaddling was a concept last practiced in a crowded stable 2000 years ago.

But this ancient method for comforting babies, famously  mentioned in the New Testament, has seen a resurgence in recent years, spurred on in part by SIDS (sudden infant death syndrome) campaigners encouraging mothers to place babies to sleep on their backs.

What exactly is swaddling?

Swaddling is the practice of wrapping infants in a blanket or cloth to restrict the movement of their limbs. Swaddling has been used for at least 4000 years for many purposes including soothing, baby-carrying and posture alignment.

But many of the old practices, despite surviving countless generations, are viewed today as cruel and slightly barbaric – let’s face it, which mother would want to swaddle their baby and strap them to a wooden board (see pic).

Modern day swaddling is a gentler affair, used to sooth an agitated baby and help the little one get to sleep.

How does swaddling work?

Those new to swaddling may find it somewhat counter-intuitive. As a new parent, my first association when I learnt about swaddling was an image of a lunatic in a straight-jacket. How on earth could it be relaxing to tightly strap your arms and legs to the side of your body so you can’t move?

As it turns out, most babies have never seen One Flew Over The Cuckoos Nest so they don’t have the same concerns as us adults. More importantly, babies up to the age of about 4 months have a thing called a moro reflex.

This innate response causes involuntary limb movements when an infant is startled by a noise or other environmental stimulus. The upshot being, newborns are naturally very twitchy and will jerk their limbs at the slightest provocation. If this reflex happens whilst the baby is asleep, it can easily cause them to wake up and thus get upset.

Swaddling prevents the infant’s limbs from thrashing around involuntarily, which stops them from waking up when startled. Another purported reason that swaddling works is that it reminds the baby of when it was in the womb. Contrary to feeling trapped, the restricted movement, provides a secure, familiar sensation of being huddled inside the mother.

In the past swaddling was often achieved with a wrap of cloth, effectively binding the baby like an Egyptian mummy. The modern approach most commonly involves a light breathable blanket such as a receiving blanket.

It’s important not to use material that’s too heavy or thick as overheating the baby can have very serious consequences. You can decide to wrap your baby’s whole body (except the head) or you can half-swaddle, leaving out one or two arms. It takes a little practice to get it right, but don’t be daunted, it’s not rocket science – more like making a burrito, (or wrapping fish and chips if you’re from the UK).

This video demonstrates the most popular method, known as D.U.D.U – down-up-down-up – which refers to the direction you fold the blanket. If you’re baby is a real wriggler, you might want to make a more secure wrap by tucking in the last corner to form a complete sealed pouch.

Although humans have been swaddling for thousands of years, today we live in an age of consumerism, so won’t be surprised to hear that there are plenty of specially designed products out there that purport to do a better job than a traditional plain blanket. Some of these  ‘swaddlers’ have wing-like protuberances or velcro attachments to make the swaddling process easier.

Swaddling is by no means a universally accepted practice.  Some doctors take the view that swaddling can increase the likelihood of hip problems in young babies. Others express concern about babies overheating and even suffocation. However, swaddling is becoming more and more accepted into mainstream infant care. Professional bodies such as the American Academy of Pediatrics support safe swaddling as does the Canadian Pediatric Society.

From a personal perspective I’m a big fan of swaddling. Our baby is a good sleeper, but on those nights when he’s a bit cranky and won’t settle, 9 times out of ten, when we swaddle him, he falls asleep straight away.

The nurses and midwives at our hospital had no hesitation in swaddling newborns which is why I’d recommend it to any curious parents.However, as always, if you’re in any doubt, exercise caution and get some help from an experienced parent, carer or health professional.