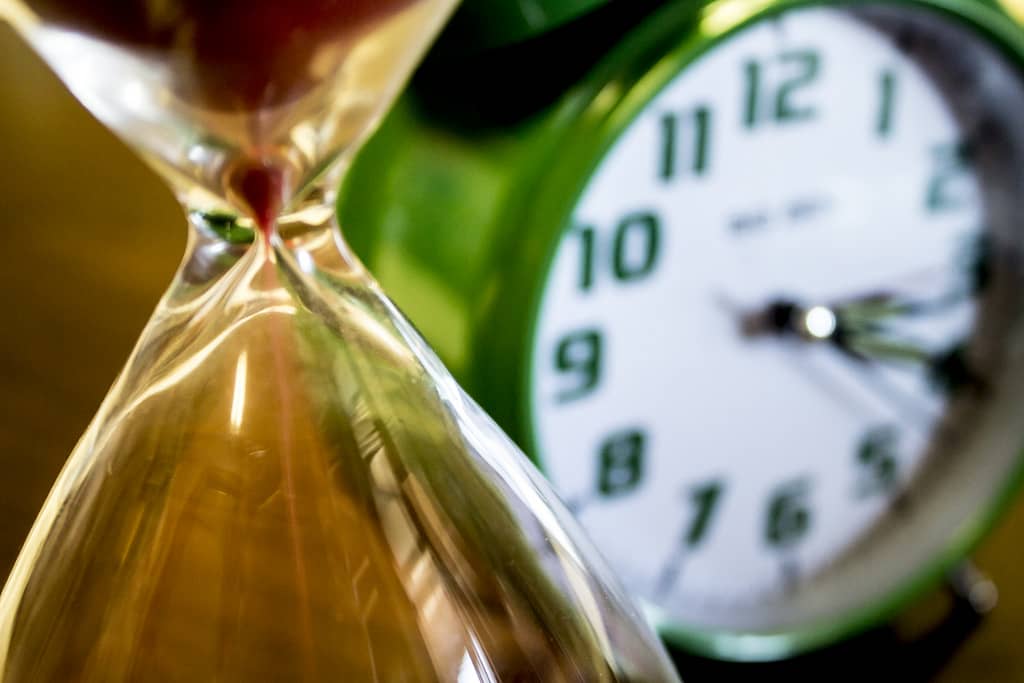 [toc] It’s no wonder the general public is so poorly educated about sleep. A review in the 1990’s found that in four years of training, medical students, on average, devoted fewer than 2 hours to learning about sleep and sleep disorders.

Even when we’re told that poor sleep constitutes a major public health epidemic, we rarely acknowledge the significance of slumber.

Part of the reason is that sleep is so universal, so instinctive, that we take it for granted, relying on folk wisdom, myths and hand-me-down advice to plug the gaps in our knowledge.

Sleep does not compute

But even just a cursory exploration into the mechanics of sleep reveals curious anomalies that don’t fit into a ‘common sense’, intuitive understanding of sleep.

Why, for instance, if you’ve been awake all-night – regardless if you’ve been working, partying, or looking after a newborn baby – is it so hard to fall asleep as soon as daylight strikes?

Surely, the more tired we are, the more likely we are to fall asleep?

But if it was all about tiredness, then why aren’t our sleep patterns free-running? What keeps humans slavishly enmeshed in the natural cycle of day and night?

A consensus, for now…

Fortunately, amongst sleep professionals, there is, at least for now, a consensus to explain these curiosities. For the past few decades, scientific understanding of sleep regulation – that is, the timing, duration and structure of sleep – has been dominated by the Two-Process Model.

For simplicity’s sake we can say the first process causes a pressure to fall asleep, whilst the second dictates the daily rhythm of sleep.

These processes cycle and interact, sometimes together and sometimes in opposition. The two-process model also explains how and why sleep deprivation, working night shifts, and jet lag can wreak havoc on our normal sleep patterns.

Although much of this is intuitive, knowing about the mechanics of the two-process model is extremely helpful in understanding more about how sleep impacts health and wellbeing.

But before we talk more about sleep, it’s useful to ask the question, ‘what is a scientific model?’

There’s a tendency to think of science progressing in a linear fashion, with successive generations of thinkers contributing incremental changes to the canon of knowledge.

But science doesn’t really progress like this at all.

Ptolemy’s ‘geocentric’ model of the stars and planets dominated for centuries until Copernicus heretically suggested that the Sun, not the Earth was the centre of the planetary system.

Similarly, it wasn’t until the 1800’s that we discredited the ancient notion of the four ‘humours’ – blood, phlegm, black bile and yellow bile –  as being central to human wellbeing.

So, in 1962,  Thomas Kuhn suggested that our concept of scientific progress needed a radical revision.

In his seminally influential work The Structure of Scientific Revolutions, Kuhn said that science progresses, not incrementally, but rather in fits and starts, via a series of revolutionary explosions in knowledge, or ‘paradigm shifts‘.

Kuhn’s research revealed that scientific models do not gradually improve, they persist until experimentation reveals an anomaly or ‘crisis’ in the existing model, which paves the way for the next paradigm.

A new paradigm in understanding sleep

So what has any of this got to do with sleep, I hear you ask?

Well, thing is, the science of sleep is barely in its infancy. So much so, that William C. Dement, the ‘father of American sleep medicine‘, jokingly referred to the status of sleep research, pre-1952, as ‘prehistoric‘.

Part of the reason is that until the 20th century, the range of experimental methods available to sleep researchers was extremely limited. But in 1924, Hans Berger demonstrated the first use of electroencephalography (EEG) – a means of measuring and recording brainwaves. This heralded a new era of research into the brain, much of it focussed in the area of sleep.

For the first time scientists could start to decode the mysterious patterns of electrical activity in the sleeping brain. This rapidly led to many landmark discoveries in sleep science including; rapid eye movement (REM) sleep, the classification of sleep into distinct, rhythmic stages, the discovery of melatonin, and the identification of the brain’s circadian clock.

The 20th century tsunami of sleep science called for new models on which to base existing research on, to explore new hypotheses and help unify the increasingly interdisciplinary nature of sleep science.

So, in 1982, a Swiss researcher named Alexander Borbély first proposed that sleep regulation is determined by two independent biological mechanisms.

Although subject to several revisions over the years, Borbely’s two-process model has since become the dominant scientific model of sleep regulation.

The basic model posits that the human sleep-wake cycle is regulated by the following:

Homeostasis is, in general terms, the tendency towards a state of equilibrium, or balance.

In the human body homeostasis refers to “any self-regulating process by which biological systems tend to maintain stability while adjusting to conditions that are optimal for survival.” and accounts for numerous self-regulating processes such as body temperature, pH (acidity), carbon dioxide levels and much more.

Simply speaking, the longer you’re awake, the more pressure there is to fall asleep.

So, as sleep pressure builds up, the desire and need for sleep increases.

When we fall asleep again,  the pressure is relieved. The process is cyclic, with sleep pressure rising again during wakefulness and then declining during sleep.

The exact biochemical processes that control sleep homeostasis are still largely a mystery, but one way we know that sleep pressure increases is via the build up of the molecule adenosine.

Adenosine gradually accumulates in the brain the longer we stay awake, eventually causing drowsiness by attaching to cells in the forebrain and inhibiting their activity. Coffee keeps up as awake because it blocks the effects of adenosine.

Process S, the drive for sleep, appears to be predominantly associated with one particular part of our sleep cycle – that is, deep or slow wave sleep (SWS).

Also referred to as NREM (non-REM sleep), SWS is so called because brain wave activity during this period is characterized by slow wave oscillations, compared to the excited, fast patterns of activity shown in REM sleep.

Experiments have shown sleep pressure is relieved only by periods of deep NREM slow wave sleep. Other sleep stages, ie light sleep and REM do not fully compensate the homeostatic sleep drive.

The correlation between Process S and SWS is so strong that slow wave activity (SWA) has become a marker for measuring sleep pressure.

In practical terms this means that when you’re sleep deprived, you experience higher amounts of SWS during your sleep episode, according to how long you’ve been awake.

So far so good. Sleep homeostasis causes a build up of sleep pressure, so the longer we stay awake, the more sleepy we get. But if Process S was the only important factor in regulating sleep, why, for instance do we feel sleepy at certain times of the day?

This is where the second part of the two-process model comes in.

The rhythms of nature

Most living creatures, including plants, animals, fungi and some bacteria, possess a kind of ‘biological clock’ – an internal timing mechanism that regulates not just sleep, but many other physiological, behavioural and metabolic functions.

Whilst some animals have what we would consider downright weird internal clocks, humans follow a circadian rhythm, from the Latin about (circa) and, a day (diem). Research has found that the average period of the human circadian rhythm is around 24.18 hours.

Our biological clock is located in a tiny region of the brain’s hypothalamus called the suprachiasmatic nucleus (SCN). The SCN consists of a bundle of around 20,000 nerve cells (nuclei) that respond directly to light via the retina and the optic nerve.

Experiments on mice have shown that when the SCN is removed, the animals have no preference for sleep or wake times and their activity is seemingly random throughout the day and night. 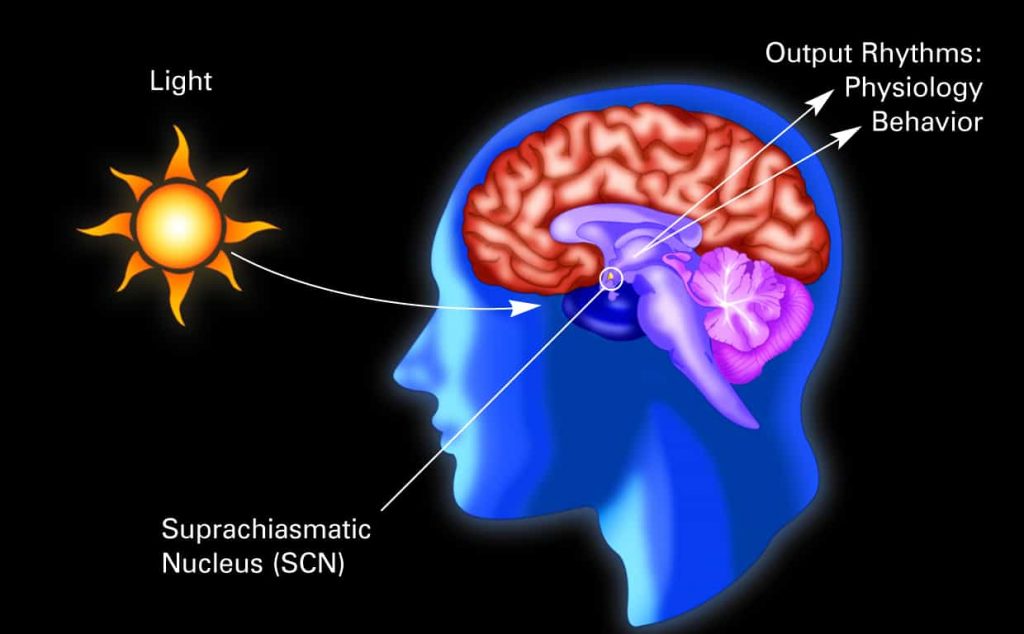 But crucially, our (near) 24-hour pacemaker is also entrainable, which means the timing of our internal clock is influenced by external cues known as zeitgebers, a German word meaning ‘time-giver’.

The most obvious example of a zeitgeber is light. The 24 light-dark cycle is the most important factor in entraining (synchronising) our near 24-hour pacemaker to the actual timing of the Earth’s natural rotation.

But other factors such as temperature, social interactions, exercise, drugs and eating/drinking patterns can also act as zeitgebers, thus affecting the timing of our internal clocks.

Circadian rhythms ensure we’re performing the right kinds of activities (sleeping, eating etc) at the right times – in sync, as much as possible with nature and the environment. The circadian process is like a station-master, whose job is to keep the trains running on time.

Circadian rhythms and the two-process model

The function of the circadian rhythm (Process C) in the two-process model, is to provides an overall timing mechanism for sleep regulation.

Without Process C, sleep timing would become haphazard – we would sleep intermittently according to how long we had stayed up. Our sleep cycle would be free-running; we’d be more prone to polyphasic sleep as are many small mammals.

But this means that sometimes, the circadian process can work in opposition to the homeostatic drive. Anyone who has experienced jet-lag can testify to this. Tiredness doesn’t always equate to sleep, when you’ve just crossed several timezones in quick succession,

Shift workers experience similar problems. Trying to sleep during the day, despite a build up of sleep pressure, can be hard work because of the conflicting signals from your circadian rhythms.

The diagram below illustrates the dynamic between Process C and Process S. The blue line shows how sleep pressure gradually builds up during the day and sharply falls off as soon as we fall asleep.

The circadian process however, is a constant oscillation that cycles between night and day. The time when we’re most likely to feel the urge to sleep, is when Process S is at its peak, and Process C is at its greatest ebb – illustrated on the graph as the largest distance between the blue and the red lines.

In the course of a normal sleep-wake routine, this dynamic works in harmony, but sometimes the two processes can collude to create a perfect storm of sleepiness.

This can potentially cause a lot of problems. Take for instance, an emergency ward doctor, or a long-distance driver working through the night.

If you need to be alert at 4am, but you’ve been awake for an extended period, you’re in trouble, because this is when the circadian rhythm of sleepiness is at its lowest and the non-linear interaction between Process S and Process C  makes you particularly vulnerable to sleepiness related accidents and injuries -much more so than predicted by the effects of sleep pressure alone.

On the flip side, we all understand intuitively that it’s much easier to fall asleep at midnight than it is at midday. This wakefulness-promoting aspect of the circadian rhythm is what keeps us up alert during the daylight hours, even though we might have had little or no sleep the night before.

It’s worth emphasizing that the two-process view of sleep regulation is just a model, and a simplified one at that.

For instance, the basic model assumes that the two processes work independently, whereas in reality, both homeostatic and circadian processes have an influence on each other – such as the way sleep deprivation has an effect on our circadian clock genes.

However, despite its limitations, the two-process model of sleep regulation is extremely useful to researchers trying to unravel many of the mysteries of sleep science we are yet to fully understand.

But it’s also a helpful way to understand how homeostatic and circadian processes affect a range of everyday sleep and wake conditions such as sleep deprivation, shift-working, jet lag and insomnia.