You may remember, a few short years ago, a tidal wave of publicity promoting the life-giving properties of ‘healthy bacteria’.

Probiotic yoghurt ‘shots’ were everywhere. Brands like Actimel sold us the narrative of ‘good bacteria’ vs ‘bad bacteria’ to flaunt their wares. Downing a shot every day, we were led to believe, was the new cure-all,  restoring your out-of-whack body to its optimum balance.

As the industry racked up billions in sales, these quasi-pharmaceutical products came under increasing scrutiny, and unsurprisingly, claims of a yoghurt-based elixir of life were found to be, let’s just say, a little hyped.

However, one positive side effect of the probiotic trend was to boost the public profile of microbial life in general. This paved the way for a mindset that food writer Michael Pollan describes as post-Pasteurian – a world-view that doesn’t ignore the influence of Louis Pasteur (the godfather of germ theory) but recognizes that the vast majority of microbes around us are not our enemies, but are in fact ‘friendly’.

The post-Pasteurian movement dovetails nicely with a surge of interest in the human microbiome – a community of 1 trillion bacteria, fungi and viruses that inhabit each of our bodies.

Whilst we’ve always been aware about this motley crew of microbes, it’s only in recent years that scientists have started to piece together the fascinating extent to which our microbiota play an integral part in human well-being.

For as long as scientists and philosophers have pondered the mind-body relationship, the brain has been considered the epicentre of human thought, behaviour and emotion.

But 21st century science is starting to reveal the brain may not be the sole agent in charge of our day to day behaviour.

The enteric nervous system (ENS), embedded in the lining of the gut,  is a complex network of up to 600 million neurons, about the same number you’ll find in the brain of a rat.

A slew of recent studies have revealed that the ENS (often dubbed the second brain ) plays a much larger role in human well-being than previously thought.

Although it’s too early to tell, research suggests that gut health may be linked to conditions as wide-ranging as immune function, hormone balance, psychological disorders, and even autism. 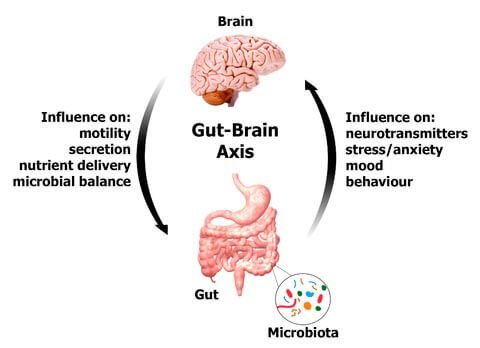 The bidirectional communication between the brain (and the central nervous system) and the ENS is known as the gut-brain axis, an information superhighway of chemicals and hormones that provides constant feedback and informs, amongst other things, our moods, emotions and sleep patterns.

Sleep and the microbiome

It may not appear obvious, but there’s a strong connection between sleep and gut-health. It’s a two-way relationship. An unhealthy microbiome impacts on sleep quality. Conversely poor sleep causes changes to the bacterial community in your gut.

For example, sleep deprivation produces an imbalance of the stress hormone cortisol. Too much cortisol can lead to a proliferation of ‘bad bacteria’ in the microbiome, leading to gastro-intestinal problems.

Poor sleep can also disrupt your metabolism, resulting in food cravings and unhealthy eating times. Sleep loss also increases levels of grehlin, a hunger hormone, and the likelihood of junk food cravings.  Aside from the sleep-obesity issue, high-fat diets cause changes to your microbiome.

Studies have shown that mice fed on a diet of junk food experienced changes in their gut microbes which affected the animals’ circadian rhythm and metabolism.

The researchers hypothesized that “gut microbes sense what, when, and how much is eaten, producing metabolic signals that feed into the regulation of circadian networks which control our metabolism”

As we’ve seen, the sleep-gut-brain connection is complex and multi-faceted. The human microbiome has an inordinate effect, not just on sleep quality, or physiological issues, but also your mood, cognition, memory and emotions. The coming years will no doubt see many more exciting discoveries in this area of research.